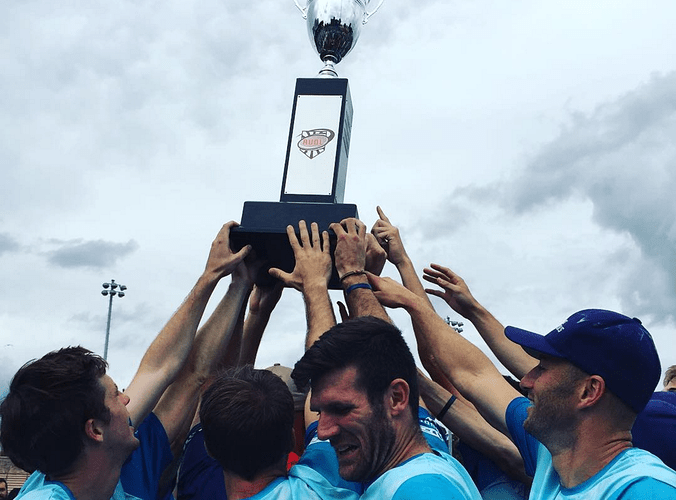 MADISON – The Dallas Roughnecks used their unparalleled depth to outlast the Seattle Cascades on Sunday afternoon, winning their seventeenth straight game and an AUDL championship in their first year as a franchise. Despite an early deficit, Dallas put up consistent points in all four quarters, nullifying a near perfect Seattle start to win 33-27 at Breese Stevens Field in downtown Madison.

The Roughnecks were challenged by what seemed like two different versions of the Cascades in the championship game. The first variation was an unstoppable machine. Early turns from Jimmy Mickle and Chris Mazur gave Seattle a quick 2-0 lead on back-to-back breaks. An eventual hold finally came when Dallas moved Dylan Freechild to the offensive line for some extra firepower. His goal put the Roughnecks on defense for the first time.

Early on, the stacked Roughneck defensive unit couldn’t answer the energy and pace from the Cascade offense. Nick Stuart saved a long huck with a beautiful full extension grab, and finished the job with a quick dish to Simon Montague. Seattle was setting the tone in the early game.

Beau Kittredge was too quick on a later possession, throwing into a Seattle poach. Nick Stuart beat Jimmy Mickle to the open side cone, and the Cascades had a 6-3 lead. It was Dallas’ largest deficit of the season, and Seattle had not turned it over once on the game. “We wanted to clean up our offensive system,” said Seattle handler Danny Karlinsky. “We did that in the first quarter.”

Unfortunately for the Cascades, the margin for error was virtually zero. Seattle had played flawlessly in the first quarter, holding onto their three point advantage at 11-8. After a Dallas hold, Seattle had 12 seconds to try and score an important hold before time expired in the first. They were on track to do so: they had centered the pull, thrown upfield twice in five seconds, and gotten Zane Rankin the disc with a cutter in isolation when the refs blew the whistle to stop play. The clock had failed to start, and the ruling was a Dallas re-pull. This time, Danny Karlinsky dropped the pull from Jimmy Mickle. A quick swing and an upline was all Dallas needed to steal a break and get back within one.

In retrospect, the dropped pull marked the moment Seattle’s hot start turned cold. With the game tied at 12-12, Matt Rehder tried to squeeze a tough upline to Zane Rankin. After a relatively easy block for Dallas, Matt Bennett made a tough blading flick huck look casual when he hit Dylan Freechild for the first Roughnecks lead.

Dallas had turned to their greatest strength: depth.

“The superstars can’t win the game,” Roughnecks captain Beau Kittredge said after their win. “The superstars do what they do. They go out and score points, control the disc, but you’re never going to win unless your depth comes out and makes big plays.”

In the second quarter, Dallas stole the momentum from an already tired Cascades team. Dillon Larberg extended the margin when he layout blocked an under and went deep to score a wild goal after a tipped disc. Soon after, Dylan Freechild found Dan Emmons on the huck for another break after a Seattle stall out from a quick-counting referee. Dallas refused to let up: Dillon Larberg found his brother Chris with a beautiful flick huck in their second connection of the game. In a matter of minutes, Dallas was up 20-15.

The Larberg brothers. Dan Emmons. Matt Bennett. They are players that on any many other teams would be the face of the franchise, but they have played secondary roles on the 2016 Roughnecks. But when the stars of Dallas weren’t enough, the role players rose to the occasion.

Seattle won the first quarter 11-10, and lost the second 10-4. According to Karlinsky, they just weren’t prepared. “We infrequently double team, we don’t try any width type zones, those are just things we don’t work on,” Karlinsky said. “I wouldn’t say that we game planned a system within AUDL rules.”

To start the third, Seattle fell victim to another quick stall, and Dallas had a short field to extend their lead. It became apparent that there would be little to no room for a comeback. The lead was extended when Jake Anderson was forced out by Matt Rehder on the sideline. The referee called Anderson out of bounds, but Rehder invoked the Integrity Rule to call it a goal. It was Seattle’s third invocation of the Integrity Rule on the weekend; they finished with a total of four.

Like in their first matchup against Toronto, Dallas played relatively even with Seattle in the final two quarters. But even with all of the Cascades’ talent, they couldn’t collect enough breaks in the second half. Outstanding plays, like Matt Rehder’s sky to end the third quarter, came often from the Seattle stars. But it wasn’t enough to claw their way back against the best roster the league has ever seen.

“Bringing 17 people for two games is a factor,” Karlinsky said. “We gave away a lot of those opportunities that the defense had earned.”

The Dallas offense seemingly got better throughout the game, even taking into account the smaller Seattle roster. Chris Mazur and Jimmy Mickle were often finding their first look, which was most often a flick huck coming from the far side of the field. “You could tell that their legs were tired from yesterday’s hard game they won,” Kittredge said.

Seattle showed life near the end, after Cassidy Rasmussen made a rare mistake on a too-deep flick huck. Donnie Clark continued his heroic performance of Championship Weekend, skying both Kurt Gibson and Jimmy Mickle with 10 minutes to go in the game. But the five goal margin that Dallas found early was insurmountable, and the steady offensive unit for the Roughnecks worked the game to a close. The Dallas Roughnecks dominated their way to an AUDL title.

“It’s very satisfying for the guys especially,” Roughnecks owner Jim Gerencser said after the game. “We have a group of guys that have all become like a family.”