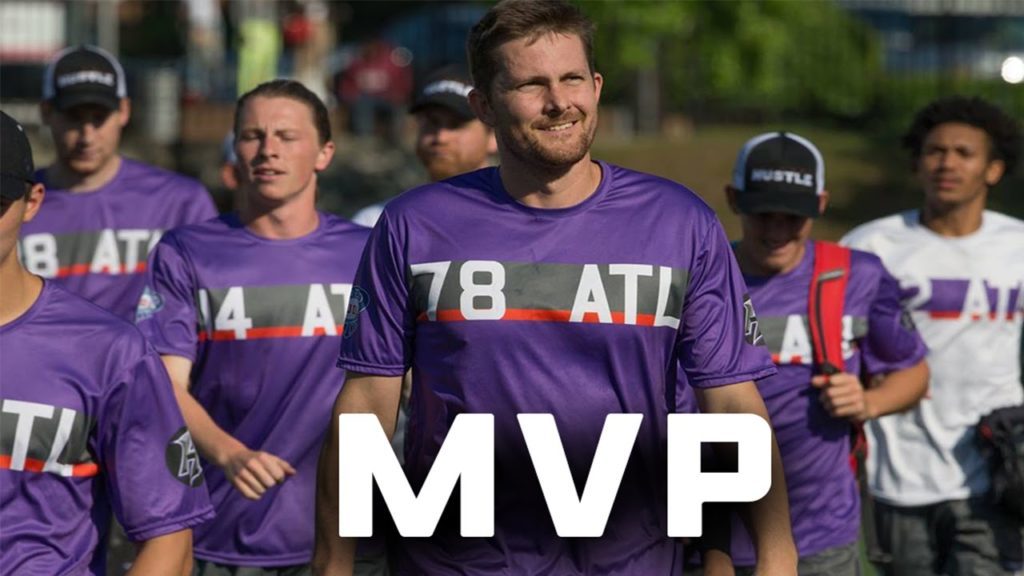 Last week, Dylan Tunnell of the Atlanta Hustle was named the AUDL Most Valuable Player for the 2016 season. During the regular season, Tunnell led Atlanta with 66 assists, good for second in the league. Tunnell was chosen from a list of five finalists, which also included Jimmy Mickle, Mischa Freystaetter, Mark Burton, and Peter Graffy.

Atlanta’s run to the playoffs and Tunnell’s value to his team pushed him above the rest of the competition. Though his traditional statistics weren’t as strong as other candidates, Tunnell led the five finalists in assists and completions. Atlanta’s offense converted 7% more of their points played into scores with Tunnell on the field, also better than any other finalist. His best game of the year came against Raleigh: he threw 10 assists, 52 completions, and just one turnover. The Hustle won the game, 25-23.

Tunnell’s receiving core played a big part in his success. Matt Smith, Sam Gainer, and Nathan Vickroy were his most frequent targets in the end zone for scores. Tunnell threw 17 assists to Smith alone. Tunnell was able to lead quick receivers for easy scores rather than relying on his teammates to make highlight skies in the end zone.

With Worlds commitments keeping many top players from consistent appearances, an underdog like Tunnell had a compelling MVP case this year. While Tunnell has not played elite men’s club ultimate in several years, he does play in the mixed division with Atlanta Bucket. Previously Tunnell played for Chain Lightning and represented Team USA at the World Games in 2009 and 2013.

The award was determined by a panel of three voters: Evan Lepler, Adam Ruffner, and me. Lepler works for the league as the play by play commentator for the ESPN3 games of the week. Ruffner works for the AUDL as its beat writer. I cover the AUDL for Ultiworld.

Tunnell joins Jonathan “Goose” Helton (2012 & 2013) and Beau Kittredge (2014 & 2015) as the only players to win the MVP in the league’s five year history. Jimmy Mickle finished second in the voting this year, followed by Mischa Freystaetter, Mark Burton, and Peter Graffy.

Tunnell is not on this year’s roster for Bucket. Not sure if/where he is playing club.