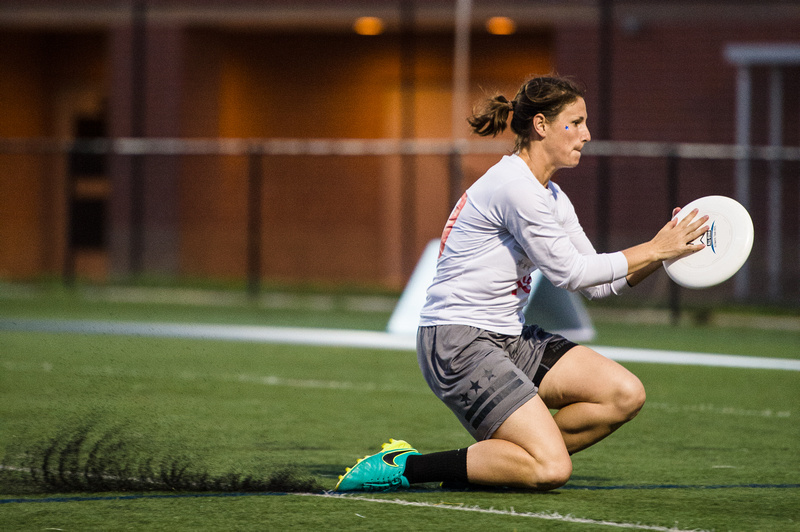 The All-Star Ultimate Tour rolled into the nation’s capital on Monday night to take on Washington DC Scandal. While the forecast called for rain, the weather held out and produced perfect conditions for a night of ultimate. With a radiant sunset splashing color over the field, the All-Stars were looking to improve on their 3-5 record; a win over Scandal would keep alive their hopes of finishing the Tour at .500. It was not to be however, as Scandal emerged victorious in a back-and-forth affair.

The game got off to a sloppy start, with both teams exhibiting shaky offense and neither defense able to capitalize on the opportunities presented to them. Both teams had a case of the drops in the early going, though it was less a case of defensive intensity causing early turnovers than it was a lack of focus and execution by the offenses.

Both teams struggled at times in the dump set, with throwers needing to squeeze discs into narrow windows just to get off resets. The most spectacular example came with the score tied at 2-2, when Caitlin Fitzgerald put a probing high-stall touch flick into the upfield dump space near the goal line. Ellen Au-Yeung went full extension to save possession and notch a hold that give the All-Stars a 3-2 lead.

After Scandal’s Jenny Fey reeled in a huck and dished for the Scandal hold to tie the contest at 3-3, the All-Stars went on the game’s first run. Following a hold, a clear drop on a swing from Kath Ratcliff gave the Tour’s D-line their third chance at a break. The third time would prove to be the charm, as Mira Donaldson scanned the field and lasered a flick just over the stack, directly into the path of Jenny Wei for the break and the 5-3 lead. The All-Stars would break again on a multi-turn point that was eventually ended by another Donaldson to Wei connection, this time with Wei putting two Scandal defenders on a poster with a soaring grab through traffic.

The 6-3 lead would turn out to be the high point for the All-Stars, as Fey and Sandy Jorgensen kicked into high gear for Scandal and swung the game back into DC’s favor. Following the run of breaks, Scandal coach Alex Ghesquiere sent Jorgensen onto the O-line, and the decision reaped immediate dividends.

After receiving an initiating pass, Fey launched a huck to a well-covered Jorgensen without hesitation. The crowd gasped at the decision, but soon it became clear that Fey’s trust in her teammate was well placed, as Jorgensen blew past her defender to reel in the score and stop the bleeding for Scandal’s offense.

Now it was the defense’s time to shine for Scandal, and after the teams traded holds, Scandal would notch their first break of the game on another Fey to Jorgensen combo, this time with Fey crossing over to Jorgensen’s line. Fey proved she could be a game-changing player all over the field. She would often start as the center handler, distribute downfield, and then follow the throw and either receive the disc back on a give-and-go or push all the way into the deep space, blowing past her handler cover and the cap on the back of the defense for several deep goals.

Scandal broke again after a flat-out drop from the All-Stars gave Scandal a short field, and Jorgensen punched in the break on a nice inside backhand to tie it all up at 7-7.

Fey and Jorgensen’s play ignited the home crowd, and the stands were raucous as both teams sent out strong lines in an attempt to take half. All-Star cutter Shiori Ogawa broke free into the deep space for what seemed like an easy goal, but a lung-busting chase down block from Jorgensen denied Ogawa, and a few throws later, Jorgensen launched a searing flick into the hands of Fey for a third straight break that gave Scandal the 8-7 halftime lead.

During Scandal’s 5-2 run to close out the half, Jorgensen accounted for two goals, two assists, and a block. A Second Team All-Club player in 2015, Jorgensen was immense on both sides of the disc all day. Her offensive impact was obvious, routinely burning any 1-on-1 matchups and roofing help defenders. On defense, her impact was less pronounced, but not less significant, as her mere presence shut down several options for the All-Stars. The looming specter of Jorgensen prowling the deep space made the All-Stars force tough throws into tight windows, which led to several turnovers.

“We were adjusting our offense to her” said All-Star Mira Donaldson after the game. “We got scared of her big plays, and started doubting ourselves downfield, which backfired on us near the disc.”

The All-Stars would regain their composure out of half, thanks in part to the insatiable motor of Jesse Shofner who started eating up yards on in-cuts at will, as well as some new defensive looks. After employing mostly person defense in the first half, the All-Stars experimented with several poach and zone looks after the intermission, which served to slow down Scandal’s aggressive vertical attack.

The All-Stars would break early in the second half to even the score at 9-9 and again to regain the lead, 11-10. Scandal’s offense was stymied by the All-Star’s shifting defensive looks, which lead to short field turnovers and easy breaks.

But while Scandal’s offense struggled, its defense once again answered the call. After two more goals from Jenny Fey sandwiched around an All-Star hold, DC would retake the lead after Mira Donaldson put an inside flick break into space with no receiver on the other end. Off the turn, Jorgensen’s imperious deep game gave Scandal a 13-12 lead that they would not relinquish.

Scandal would break twice more to win, on a hammer from Fey and a huck to Jorgensen following miscommunications from the All-Star offense.

It’s appropriate that Scandal’s two superstars had a hand in the finishing touches of the victory, as they were the catalysts behind most of DC’s success on the evening. While Scandal may not have the depth of their teams that won back-to-back national titles in 2013 and 2014, Fey and Jorgensen made their case for being the best one-two punch in the country, and demonstrated that if they are firing on all cylinders, DC can go toe-to-toe with any team.

It’s also appropriate that the All-Stars surrendered three breaks to end the game following offensive miscommunications. The final one, on game point, was the result of a tremendous break backhand into space from Shofner that floated perfectly up the break lane… only to find that no receiver had been cutting. It was a trust and chemistry throw that ended a night for the All-Stars in which neither was quite working for them.

Despite several offensive bright spots and some impressive team defense, the All-Stars didn’t show enough polish and chemistry to get the job done against one of the top teams in the division. They’ll have to improve on both if they hope to end the Tour on a high note against defending National champions Boston Brute Squad on Wednesday.