COLUMBUS – With many of Toronto GOAT’s veteran players coming off of a disappointing Worlds performance competing with Team Canada, a lackluster performance at the Elite-Select Challenge seemed primed to happen. Instead, GOAT was locked in en route to a 13-9 win over Denver Johnny Bravo in the ESC final on Sunday.

With one of the more complete rosters at the tournament (a rarity for GOAT during the regular season), Toronto played stifling defense and ran through an increasingly effective Mark Lloyd (2G, 4A) on offense.

“Maybe we should always have 20 people at tournaments,” said GOAT coach Scott “Shooter” Hastie with a smile. “It works out well.”

Breaks and an insurmountable lead came early for GOAT. They went up 2-1 after a messy Denver offensive point, then extended the lead after Mike MacKenzie blocked a huck and Dave Hochhalter hit GOAT rookie Brett Tan for one of his three goals. Bravo’s Owen Westbrook threw away the first pass on the ensuing possession and GOAT quickly converted to take a commanding 5-2 lead.

“We saw some good D in the Rhino game but I think that GOAT plays defense at another level than a lot of the teams that are at this tournament,” said Johnny Bravo captain Jesse Roehm.

Bravo’s offense settled in after that – they were only broken once more in the game – but the damage was done. And the defense couldn’t get anything going against a veteran GOAT O-line. Every possession was kicked off with a classic GOAT pull play, creating space for isolation cuts and using counters if the defense tries to sit on it. “They run set plays better than maybe any other team,” said Bravo captain Ben Lohre.

Andrew Carroll, nursing a tweaked ankle, was moved onto the GOAT O-line to put less pressure on the injury and was instrumental in the team’s success this weekend, often as the initiating cutter. Three of GOAT’s five holds in the second half were directly attributable to him. At 7-5, after Bravo’s lone break of the game, he facilitated underneath before cutting break side for the score. Four points later, he came underneath and saved a Toronto turnover by leaping to snag a high throw, then immediately stepped into a huge backhand to Lloyd for a goal. Three points later, he blew past his mark deep, creating a two-throw score.

Could Carroll – a stout defender that made Ultiworld’s 2015 All-Club defensive team – stay on the O-line? “It looks like he likes it there,” said Hastie.

Bravo was playing in the final with just 16 players, and did not travel with Jimmy Mickle or eight other rostered players. Given that, plus the team’s roster turnover, a new coach, and totally new systems, the leadership was pleased with the weekend.

The Bravo defense managed a break to start the second half after Toronto’s Jeff Lindquist threw the disc away in the red zone. That closed the lead down to two. But the D-line couldn’t get GOAT to cough it up much more, and a Westbrook drop in the end zone gave the break back.

“They might just have those extra steps that maybe the rest of the people who didn’t go [to Worlds] just don’t have,” said Hastie. “We could totally drop off the face of the Earth in two weeks.”

That sounds alarmist for a team that was without some of the area’s best talent, including Isaiah Masek-Kelly, Andy Ouchterlony, and Derek Alexander. Currently, only Ouchterlony is on the active roster, but Hastie suggested Masek-Kelly, Karl Loiseau, and others could still join the team later in the season.

GOAT will take the field next at the Chesapeake Open in August. Bravo will play at home at the Pro-Elite Challenge in Denver at the end of the month.

I may have missed it elsewhere - what happened to Bob Krier?

Has a Bravo roster been released anywhere yet? 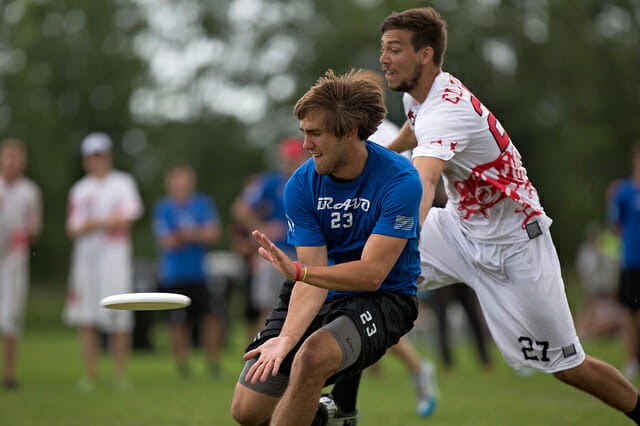 Major changes are coming to Denver. Check out the Johnny Bravo roster for 2016.