The In-Between: From Ledgestone To Brent Hambrick 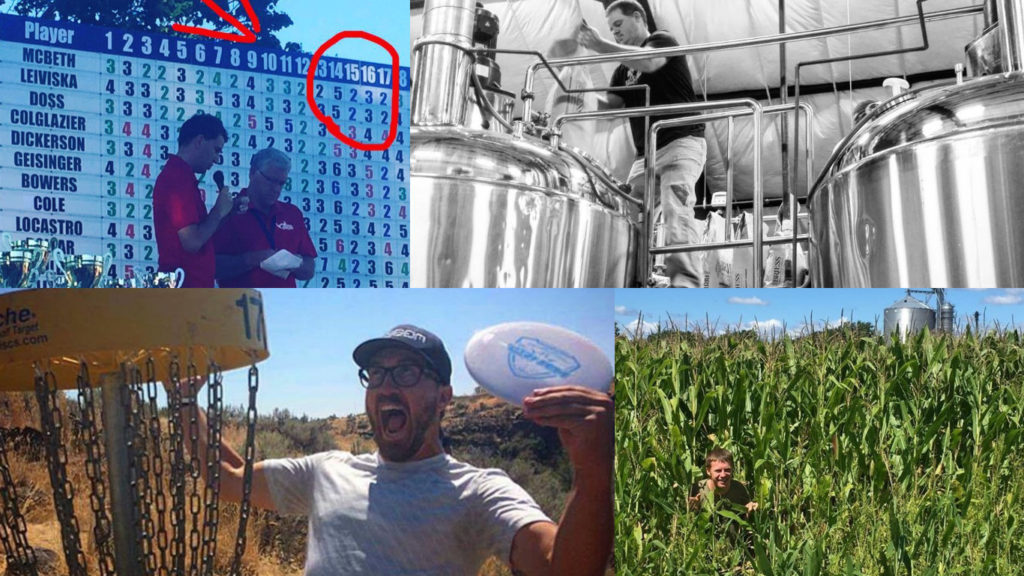 Professional disc golfers play many events every season, but what are they up to when they aren’t trying to get on the lead card? Every other week we here at Ultiworld Disc Golf will spend some time aggregating the slightly on, but mostly off-course activities of disc golf pros everywhere. It’s disc golf’s zeitgeist, let’s see what’s going on!

Now that the World Championships and the Ledgestone Open–two of the largest fields we’ll see all year–are finished after back-to-back weekends, pro disc golfers are beginning to spread back out across the United States. The Brent Hambrick Memorial Open, a PDGA National Tour event in Columbus, Ohio, is up this weekend, so let’s find out what all the pros are up to on their way to Ohio - or wherever else they’d rather be or go.

Looks like Nate Doss and Valarie Jenkins are keeping busy, as usual. They’re making some beer for the Disc Golf Pro Tour finale and calling it Stable IPA this time, after last year’s Understable IPA. It’s a partnership with Fiddlehead Brewery, and the “practice round” of their Stable IPA is on tap now at their location in Shelburne, Vermont, before they make some adjustments for the final round of Stable IPA that will be ready in September. (As an aside, I had a raspberry brett from Fiddlehead once and it was great.) Oh yeah, there goes Nate now, busy dumping stuff into that big metal thing, scraping stuff out of one too, and carefully spilling some hops into a giant bucket; looks tough! Anyone who can get their hands on some of that and deliver it to their stomachs next month is certainly in for a good time.

Speaking of beer, Devan Owens is making the most of his time in Illinois by leaving Illinois for the Chicago suburbs in Indiana to visit 3 Floyds Brewery in Munster. Good choice, Devan: They make lots of good beers, some of the better pale ales I’ve had. Readers, if you can, I suggest checking them out. Maybe Devan is on his way to the Hambrick, but he’s not registered, and the next big tournament out east is still a few weeks away in Vermont. Either way, this is at least a 1030-rated travel stop.

When you run out of green numbers, course is soft bruh!! #THISISAJOKE #KIDDING #dontfreakout 😂😂😂

Meanwhile, Nate Sexton made a new friend, but really his main focus is still totally ripping on soft courses everywhere. Dude just can’t help himself; he’s got troll fever. And the only antidote is…fewer birdies. Huh? But in all seriousness, this is an 1100-rated post.

Eric Oakley had an exciting weekend hitting an uphill ace in Idaho, and he sure looks ready to party, eh? Yeah, Idaho; I ran into a fellow disc golfer at a tournament last weekend wearing a shirt with the outline of Idaho and the text, “Idaho: Not so bad after a few beers”. Hey, judging by Oakley’s expression, maybe he knows all about that too?

Dion Arlyn doesn’t hit too many big time tournaments, but he certainly knows how to hit the beach.

Zach Melton explored #nature and all its wonders. Madison Walker got in on the #nature action herself back in Kansas, while Shawna Buzzingham is at it too out in Idaho (two mentions of Idaho in one post? I had no idea I was capable of this). I wonder what kinds of #nature they’ll all find in Columbus this weekend?

Practicing for upcoming tournaments is pretty important, no question there. But Bradley Williams really needs to get some work in on his hashtag game. Phew, good thing Don Smith was there to help him out. Watch out for each other out there.

Oh yeah, and last week Overstable Studios started Instagramming a bunch of their photos from Worlds. They’re still at it now, so that’s cool. But Nikko Locastro had a bone to pick with one of them. (Pro tip: don’t read too far down the comments unless you want to read the equivalent grandparent scorching hot take on a professional athlete caring about what they do.) Like Overstable promised him, there were plenty more pictures of him doing other stuff…ouch, that roll away was rough. But hey, look at that first one Nikko. You’re Fly[Life-]ing! Jump after every big putt so they can catch a picture in mid-air–the Brand Synergy Gods smile upon thee! If I were Darren Rovell (so, so happy I’m not) I would artfully handcraft an artisinal tweet describing how you could capitalize on it.

Gregg Barsby, who apparently transcended time, space and this material reality we all so desperately cling to, has returned to us here on Earth, thankfully.

Alright, I guess that’s it everyone. Until next time, keep those Darts flying straight.