With an updated set of Club Division rankings released earlier this week, USA Ultimate solidified the bid allocations from Sectionals to Regionals. But for those more interested in seeing how the bids to Rockford will shake out, below are the top 20 teams in each division and the current bid situation. With just one more weekend of the regular season remaining, those on the edge of the Nationals bid picture will be anxious to see how results this weekend stir up the rankings. 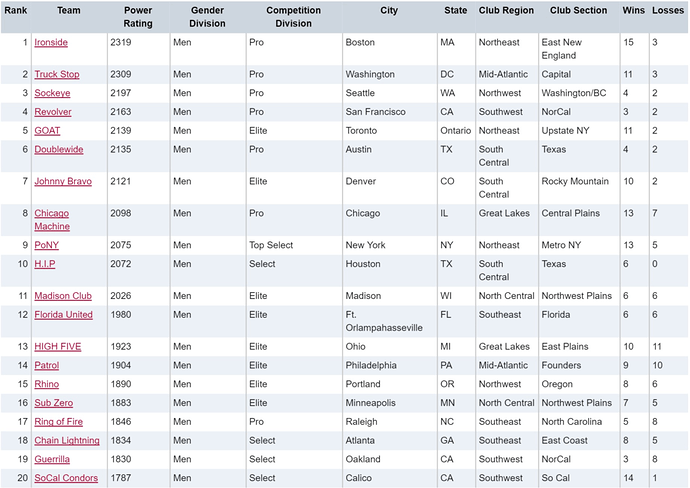 After a very impressive showing at the Chesapeake Open, Ironside moves up into a somewhat surprising spot atop the rankings. With two wins over Truck Stop and two big revenge victories over High Five, it was by far the best weekend Boston has had all summer after some early season hiccups. Of the East Coast heavyweights, only Truck Stop is heading to the Pro Flight Finale this weekend, so depending on how things shake out in Vancouver, Ironside may yet hang on to the top spot heading into the Series.

Also surprising, Houston’s H.I.P. used a dominant performance at the Select Flight Invite to rocket up into the top 10 – well within bid-earning territory for the South Central. At this point, they may be regretting the decision to sign up for the Bro Flight Finale. They will hope for a second straight solid weekend there to hang on to their bid.

The South Central’s gain was once again the Southeast’s loss. Currently, Florida United is the region’s only representative inside the top sixteen, though Ring of Fire and Chain Lightning lurk as the first two teams outside the bid-earning cutoff. Both had their opportunity to move up with results against the strong competition at Chesapeake, but neither picked up the kind of marquee win that could have earned them a bid. Neither squad is competing anywhere this weekend, so they will be dependent on poor performances elsewhere to improve their current standing. With the 15th and 16th ranked teams in action in Vancouver, the Southeast will be rooting for Rhino and Sub Zero to slip up.

Also looking for a miracle this weekend is the Southwest. With their second and third teams sitting at the bottom of the top 20, the region looks like it may come up short yet again in their quest for a second bid. Guerrilla is in action at the Bro Flight Finale and will need a big weekend to sneak past enough teams to change that equation. 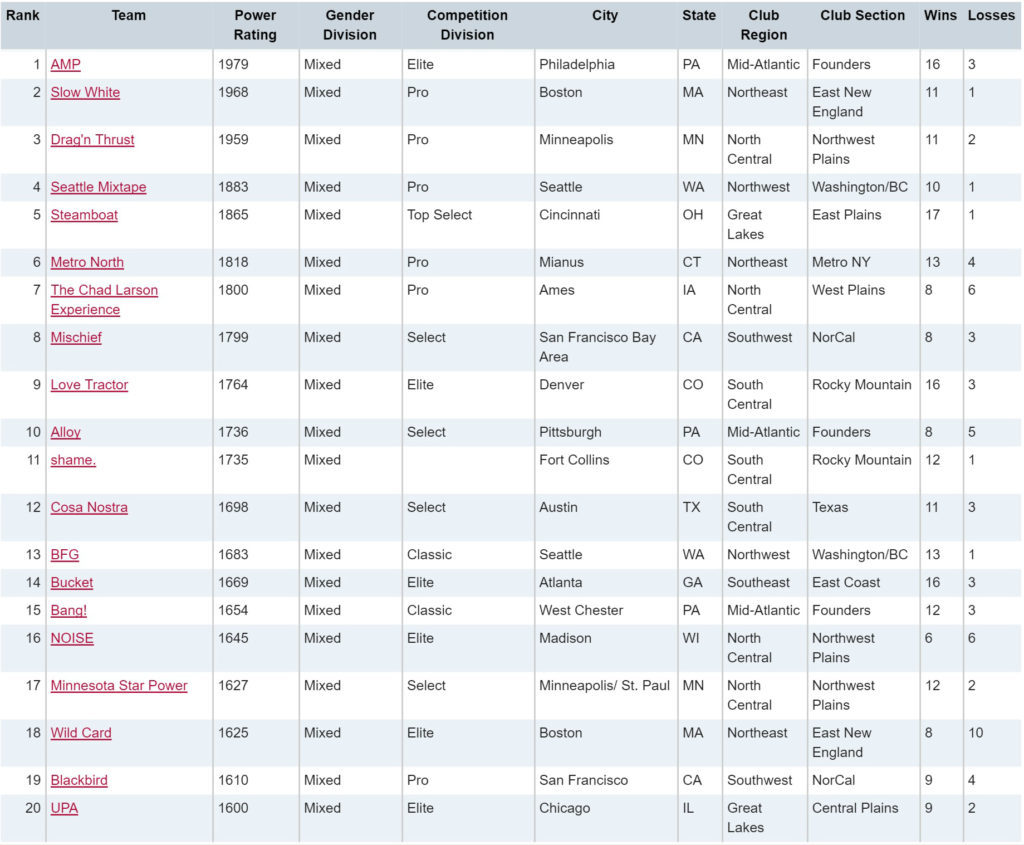 Not for the first time in the Triple Crown era, Amp dominated a late-season Mid-Atlantic tournament to shoot to the top of the rankings, knocking Slow White from that spot for the first time all season. Philadelphia will see a much tougher set of teams in Vancouver this weekend than those they mopped the floor with at Chesapeake and will be hard pressed to hang on to their slender advantage over a pack of tightly-bunched teams near the top of the rankings. The Pro Flight Finale will go a long way to determining what seeding could look like in Rockford.

This weekend will also have a huge impact on the other end of the rankings. Very little has changed in the bid picture this week for mixed; one bid moved from the Northwest to the North Central after Seattle’s Pegasus dropped from a bid-earning 16th spot all the way to #69 with a disastrous performance at Kleinmann. But with loads of teams just outside the bid picture in action during the regular season’s final weekend, next week’s rankings could see a much larger shake up.

For the second straight season, Blackbird will be heading to the Pro flight Finale in search of a bid for the Southwest. With only 35 points separating them from the 16th spot, one or two big wins should be enough to capitalize, though they will be anxious to show more than that after a rather pedestrian regular season thus far. Polar Bears, who sit at #22, could also challenge for a bid, but need a huge performance to make it happen; they will play enough good teams in Vancouver to at least have a shot.

Those regions most as risk of losing their bids this weekend appear to be the North Central and Mid-Atlantic. NOISE will be looking to win out convincingly at Cooler Classic to solidify their spot in the top 16, while Bang! will be hoping that Amp plays well so they don’t see their power rating drop any lower.

With Fort Collins’ shame. picking up their ten sanctioned games to stay in the rankings, the South Central – typically an afterthought in mixed – seems almost assured of hanging onto three bids for the first time ever. 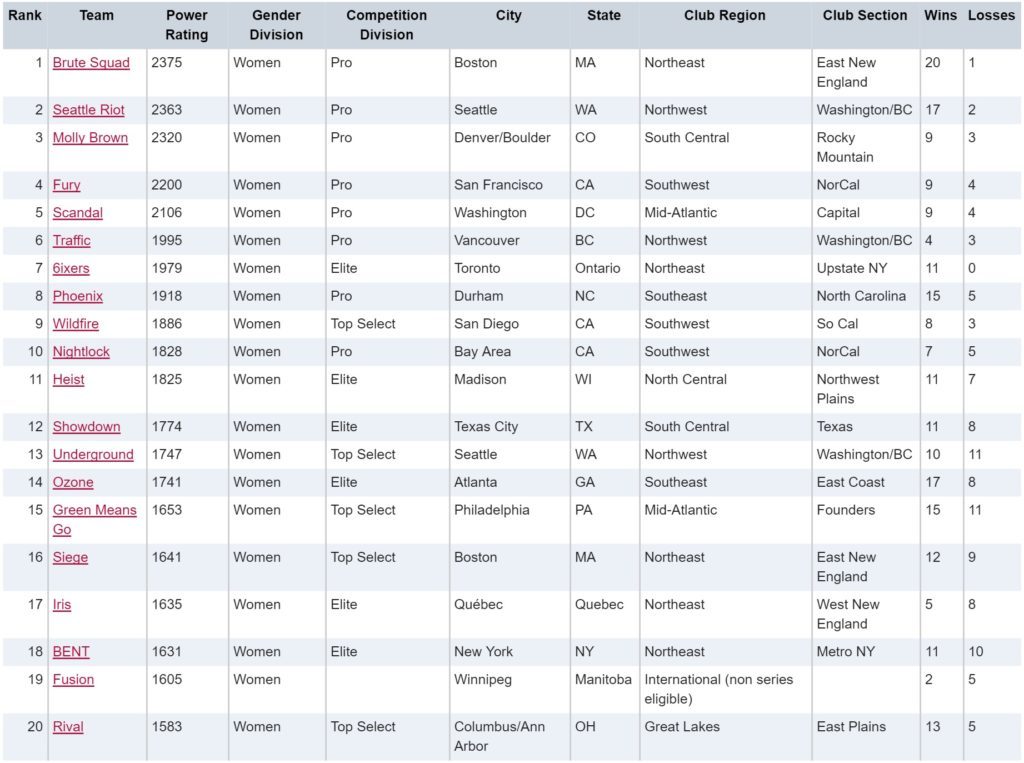 Through the quirks of the algorithm, Brute Squad overtakes Riot this week to reclaim the top spot, despite neither team being in action. Little matter; the Nationals overall one-seed will most likely be decided on the field by the teams in Vancouver this weekend.

No changes in the overall bid allocation projection for the women this week. Green Means Go played just well enough at Chesapeake Open this past weekend to hang on to their bid-earning spot. The Northeast, despite being home to teams sitting at #16, #17, and #18 in the rankings, does not currently earn a third bid since the Great Lakes doesn’t have a single team qualified ahead of them. With the Pro Flight Finale the only sanctioned tournament on the books for the women this weekend, there is little the Northeast can do to change the math, which could make for an absolute bloodbath in Devens in a few weeks. If anything, all of those teams will be rooting for Heist at #11 to completely implode in Vancouver and plummet down the rankings.

I think that watching Schwa (-102 from a bid) will also be interesting in Womens. They are playing against a lot of strong teams and a lot of points are there on the table for them to take. Their performance at PEC doesn’t indicate that this would happen, but this is all but a home tournament for them.

Also, with only 12 points between GMG and Siege, quicks in the system could swap those two, as Siege earned some points at the US Open and a lot of those teams are still playing. Unfortunately for the NE, those games are also aging each week.

(Disclaimer: I am not an algorithm expert even though I’m involved with USAU - this is all personal thinking and commentary)

"If anything, all of those teams will be rooting for Heist at #11 to completely implode in Vancouver and plummet down the rankings."
But isn’t Heist the only NC team in the top 20, so that wouldn’t actually help the NE at all?

Good points, both Adam and Fantusta. I should have mentioned Schwa’s opportunity to sneak into the picture with a strong weekend, especially since they’re playing at home. I’d be surprised to see the Seige vs. Green Means Go swap based on results this weekend, though it is possible. And yes, since Heist is the only North Central women’s team currently earning a bid, even a complete collapse at PFF won’t change the bid allocations – my mistake on that one.

No. 17 Minnesota Star Power is competing in Cooler Classic along with No.16 NOISE.

I think that the two together does yield an option for some points, but the other competition leaves some risk for loss of points. Only one of MSP and Noise can win that game, so… that may be the difference.

Truck Stop is there as the #1 seed.

At this point, they (H.I.P.) may be regretting the decision to sign up for the Bro Flight Finale.

I doubt it, they need to hit the 10 game minimum, right?