USA Ultimate has announced the final regular season rankings and the bid allocation from Regionals to Nationals. Here is the breakdown for each Division. Stay tuned for a special emergency Deep Look podcast to break down the bids and the Regionals competition to come.

Although some teams switched ranking positions, our final bid allocation predictions were spot on in all three divisions. 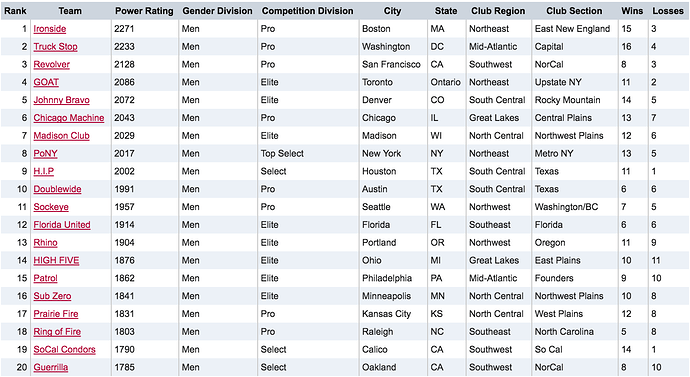 The bid allocation is exactly as we expected, with a punishing one bid getting handed down to the Southeast and Southwest regions and the South Central sitting flush with three bids after a strong regular season from Houston H.I.P.

The North Central looks primed to be a competitive tournament as three good teams in Madison Club, Sub Zero, and a red hot Prairie Fire battle for just two bids.

The Southeast will be the most brutal, as a relatively deep region with a lack of top tier talent has to dole out just one spot at Nationals to a historically dominant region. Raleigh Ring of Fire is in danger of missing Nationals for the first time in 20 years. 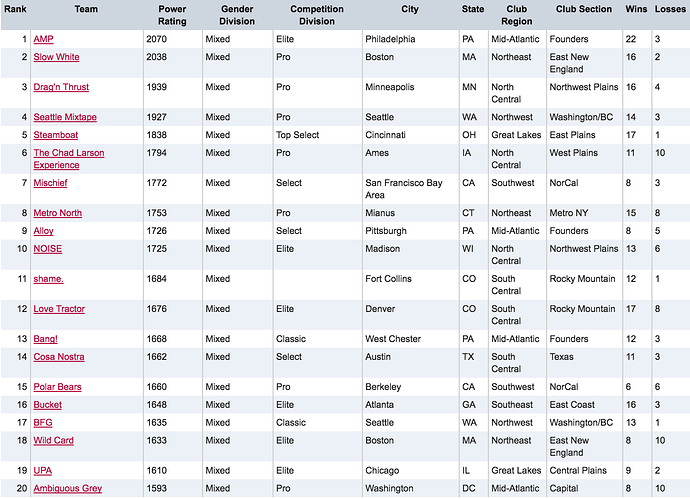 The Southwest manages a minor miracle as they claw a second bid from the jaws of the Northwest after the San Francisco Polar Bears did enough at the Pro Flight Finale to climb above Seattle’s BFG for the last spot in the top 16. What’s amazing is that they couldn’t have done it without a really poor performance from their regional rival San Francisco Blackbird at the Pro Flight Finale. BFG’s ranking was tied closely to Blackbird’s; a 1-5 showing in Vancouver, WA, this weekend from Blackbird dropped them down the rankings and pulled BFG with them.

The Southwest’s gain is the Northwest’s loss. Now Seattle Mixtape will have to fend off BFG, Birdfruit, and other contenders in what should be an exciting Regional tournament.

Also notable in Mixed is the South Central earning a bid via Fort Collins shame., a team that played just one top 25 ranked team all season: Boulder Love Tractor. They lost by one to Love Tractor back in June and crushed all the other teams they played. Their two large wins over Bozos buoyed them in the rankings to a #11 finish. ((An earlier version of this article suggested that shame.'s close loss to Love Tractor was what boosted their ranking. That was incorrect. See the discussion in the comments.))

The Women’s Division was the only one to feature an autobid getting sent to a region that didn’t land a team in the top 16. The Great Lakes earned a bid with the region’s two highest ranked teams – Columbus Rival and Chicago Nemesis – landing at #20 and #21, respectively.

That snatched a bid away from the Northeast, which hosted the top three teams outside of the bid cutoff (#16 New York Bent, #17 Boston Siege, and #18 Quebec Iris). That should make for a brutal battle at Regionals as #2 ranked Boston Brute Squad and #7 ranked Toronto 6ixers try to fend off the challengers in the two bid region.

Three California teams – San Francisco Fury, San Francisco Nightlock, and San Diego Wildfire – earned bids for the Southwest as the West Coast (including the South Central) swept up half of the country’s bids.

The close loss to Love Tractor was actually shame.'s worst result. Only 5 games actually counted in their rankings and the games that bouyed them to a bid were actually the two solid wins over #42 Bozos at Fort Collins Summer Solstice (http://www.ultimaterankings.net/rankings/2016-club-mixed/_2bEOUMsH3E4bB_2f25l5b0AQy4DPQC_2bDqZZkIFBGdg4ZFU.html).

I see what you linked there, but what are these numbers relative to? It makes little sense that a one point loss to a team that finishes ranked #12 would be bad for your eventual ranking.

Is it seriously possible that had they NOT played Love Tractor, they would have been better off? I don’t think that makes a whole lot of sense.

The algorithm runs iteratively until convergence - those numbers are the net effect of each game on the converging run.

Because shame won so many blowouts that buoyed them up high in the rankings, each game that does have an effect has a large effect, including their one point loss.

Yes. The game vs Love Tractor hurt shame.'s ranking. LT ended up with a slightly lower ranking (1676) than shame. Their rating for that game was 1676-125=1551. This is 133 points lower than the shame.'s final rating (1684). If this was the only game that counted, they would have been ranked 21st. This game counted for about 1/5 of their total rating, so -133/5=-26.6 is roughly how much this game lowered their final rating (-30 was calculated in the analysis I linked which includes weighting and higher order effects as well).

Obviously I am not the first one to point out flaws in the algo, but this particular problem seems like it could be corrected by including some kind of strength of schedule component.

There is already a strength of schedule component included, as your opponent’s rating is the base of the score received for a given game:

“The points for a given game is given by the opponent’s rating plus or minus (in the case of a win or loss, respectively) some rating differential x.”

In shame’s case, the larger issue is that only five of their games are counting towards the ranking. Small sample sizes come with increased variance. It’s more likely that shame’s rating is not an accurate portrayal of their quality (to be fair, this could cut in either direction), than that the ratings for Slow White (20 games counting) or Bozos (21 games counting) are inaccurate for example.

The algorithm ignores all blowout results, provided there are at least five results that count:

“Finally, if a team is rated more than 600 points higher than its opponent, and wins with a score that is more than twice the losing score plus one, the game is ignored for ratings purposes. However, this is only done if the winning team has at least N other results that are not being ignored, where N=5.*”

So one potential fix to situations like this would be to increase N. It’d increase the sample size of games counting towards ratings, as well as incentivizing teams like shame to not play a small schedule consisting largely of teams they know they’ll blow out.

As Alex mentioned, the algorithm already takes into account strength of schedule quite heavily. The reason the game has such a drastic effect (in addition to small sample size) is that the algorithm doesn’t take into account the average distance between teams in terms of actual points. (+/- 30 is only significant because each team is about 5 points apart).

In laymen’s terms, losing on universe to a team could have a significant effect if there are a lot of teams ranked almost exactly the same as the one you lost to. The logic being that you should be ranked just below any team of that strength. If you’ve beaten any of those close teams, the two games will effectively hold you in place.