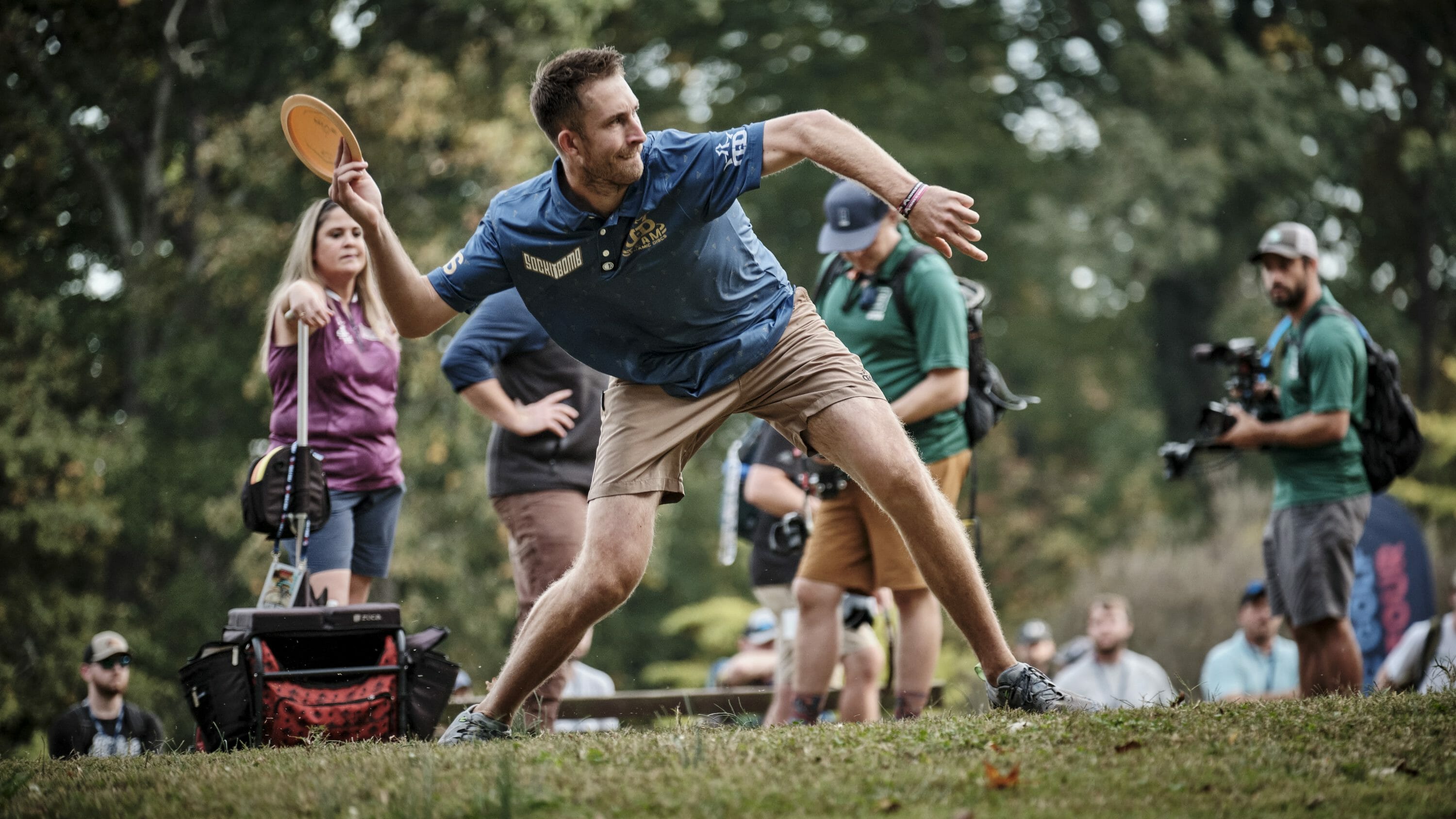 Well, the results of the 2022 Disc Golf Pro Tour Championship should stop all the arguing on the internet, right?

Disc golf season may be over but arguing has no off season. But in the great debate of who has owned this year out of Ricky Wysocki and Paul McBeth, this past week’s DGPT finale at Nevin Park in Charlotte tipped the balance towards Ricky. He won more DGPT events, he beat Paul in the head-to-head battles (9-8 with one tie), he finished at the top of the DGPT points table, and he capped of the year in style with a stunning playoff win over Isaac Robinson.

The knockout formula for the tour finale adds a compelling final chapter to the story of the year with the long grind of the Pro Tour coming down to a final battle of attrition. Some don’t make the play-in, others fall in the early rounds, and others still don’t make it through the quarters and semis. Then we are left with a final four to battle it out until one champion is left standing. It’s clearly how the Romans would have done it if they’d invented plastic along with aqueducts, stone archways, and the ballista.

Starting each round of competition with everyone at even par creates an intriguing dynamic too. It’s not quite match play, but there are some elements of playing the person as much as the course. This was something that Ricky Wysocki acknowledged after finishing second in the semi-final round, one behind McBeth. It was a round where he recovered from a bad misfire off tee one to card seven birdies.

“It was one of those rounds where I made a bad mistake off the bat but that allowed me to refocus,” he said. “I birdied a lot of holes on the front nine which set me up for the back nine because the back nine turns into match play. It’s a throwers course more than anything. If you are not getting off the tee, you have no chance for birdie and sometimes not even any chance for par if you are too far off.”

Throwing discs down tight and winding fairways lined with skinny trees is as Charlotte as NASCAR. When Hornets Nest was taken out of commission, the Charlotte Disc Golf Club only needed to move the event barely four miles away to another long, championship-level woods course. Which brings to mind the other great pointless debate — which style of course is better? Woods, open, mixed, or mountain? This week scored one for the woods in that ledger. Something about a woods course makes the best shots better and the great shots seem miraculous.

The first of those miraculous shots came early in the final. After missing again off the first tee but this time managing to save par, Wysocki birdied hole two and then on the 462-foot hole three speared a forehand down the fairway that perfectly matched the arc and drop of the hole to slide his disc into bullseye. It was if the course designer had somehow taken a mold of Wysocki’s 450-foot forehand throws and made a hole out of it. Gannon Buhr and Paul McBeth couldn’t scramble to save par after early tree hits on this hole, opening a gap between them and the top two that they could never breach.

Buhr seemingly took himself out of contention with three costly bogeys in the first ten holes. But he made a late run to get within one throw of the lead before narrowly failing to get the birdie he needed on hole 18 to join the playoff. McBeth left his upshots short on several holes, forcing himself to try putts from outside circle to that never seemed to drop. It was a slow death by a thousand cuts for the 6X world champ as he just couldn’t get the birdies he needed to pressure the leaders.

After keeping his scorecard clean in the in the semifinal round, Isaac Robinson started the final round with the same precision, taking an early lead after hole one that he either shared with Wysocki or held, right until the very last hole. Robinson let Wysocki back in by missing a very makeable putt on 12, then a tree kick right with a failed rescue attempt by Wysocki on hole 16 gave Robinson the one-throw lead back. Here again, though, Robinson let an opportunity to go two ahead slip by missing a 25 foot birdie putt. Both players bogeyed hole 17, Wysocki by scrambling to save bogey and Robinson by missing another seemingly makeable putt for par, this time from just beyond circle’s edge.

By hole 18, Buhr has snuck back into contention and joined Wysocki in needing a birdie to force a playoff with Robinson. Both threw huge drives but crucially Buhr was to the right side of the fairway, and he was forced to throw a roller that ran right down the left towards the green but then rode the rope and ran itself out of bounds. Wysocki rolled the dice by cutting the corner of the hole over OB and landed in prime position high on the left side of the fairway. He then threw a forehand that tracked over the heads of the crowd lining the left side of the fairway before fading into the green 16 feet from the basket. Robinson didn’t threaten a birdie on the relatively open 875-foot hole and played for an easy par to secure the playoff with Wysocki. The only problem for him was that they were returning to the very same hole for the decider.

Back to tee 18. Robinson threw a similar shot, safe to the right side. Wysocki threw higher and wider but still to a better position on the left side. Again, Robinson couldn’t reach the green on his second shot and Wysocki was left with almost the identical power forehand down the left side of the fairway approaching the green. On a hole that very few players had birdied all week, he would need to birdie twice in a row to take the DGPT championship. His approach shot was nearly identical and faded to just outside circle’s edge. Robinson laid up to force Wysocki to putt for the win.

For a putt that was far from a gimme and that had so much riding on it, Wysocki seemed to take very little time. He stepped up and almost casually threw the disc dead center from 38 feet to be crowned Disc Golf Pro Tour Champion. It was virtually a hometown win for the South Carolina boy, and the crowd was chanting his name.

“Coming into the week, I had the feeling that it was going to come down to eighteen,” said Wysocki. “Everyone was getting pars and being down one I had to get real aggressive off the tee. I just missed the mando tree and got into a great spot. I was able to capitalize and lean on my forehand which is my go-to, and I was able to throw it inside the circle twice there at the end. Hole 16 was a big turning point in the round. I got a bad kick, and he threw a great drive and I was talking him in for a birdie. But he missed a short putt and that was a big momentum shift in the round. Down the stretch, it turns into matchplay. On 18, he laid up and I saw the opportunity.”

We Already Knew It Was Kristin’s Year 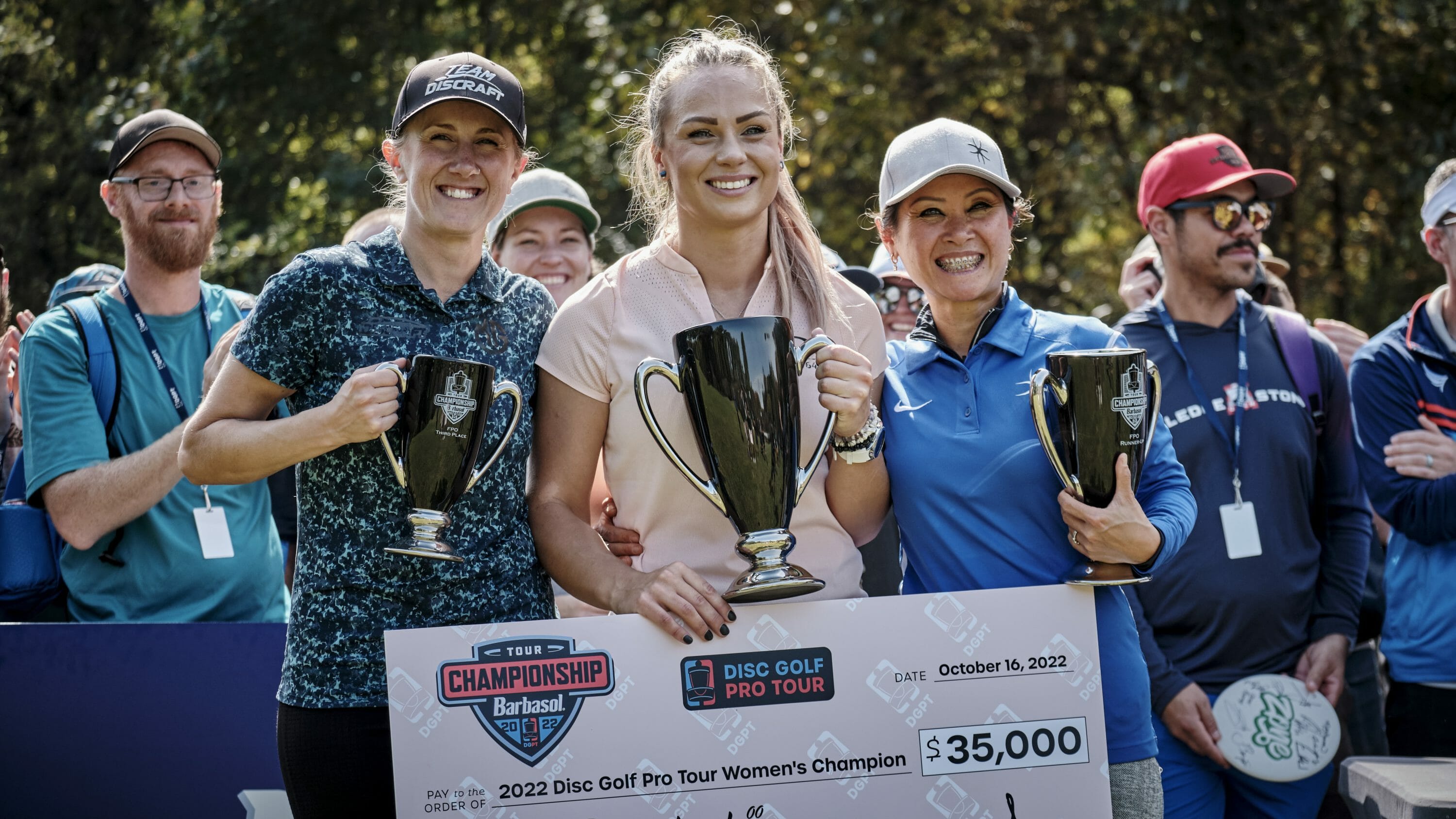 Nobody is arguing that it hasn’t been Kristin Tattar’s year. The World Championship, the Tour Championship, leading the tour standings, and never having to step off the podium all year has silenced any debate. The four throw lead that she carried up the hole-18 fairway before “getting a little loose,” as she described her last few shots, might have created the impression that she dominated the round, but this was far from the case.

It was Valerie Mandujano and Missy Gannon who got early birdies and took the lead over Ohn Scoggins and Tattar, who wasn’t to find a birdie until hole six. All the finalists looked nervous, and all were playing conservative. They seemed determined to not take themselves out of contention with one of the double or triple bogeys that lie in wait off the fairways of every hole at Nevin. Putts that might have been aggressively run in the early rounds were laid up. The match play ethos seemed to take hold early; caution looked to be the rule.

It was Tattar’s steadiness that won out, though. She didn’t miss the fairway until hole 7, and her 76% fairway hits was only bettered in the tournament by her own 81% the day before. Those numbers are impressive when you realize that hitting some of Nevin’s fairways is a bit like trying to land an airliner on a country road.

Gradually, the others succumbed. Mandujano went bogey and double bogey on holes five and six. Gannon double bogeyed seven then bogeyed eight. Scoggins bogeyed five and seven. All the while, Tattar, although somewhat frustrated at her circle-two putting, kept the disc on the fairway and took the birdies when the opportunities came. Before hole 18, when she relaxed a bit too much with the tournament in the bag, Tattar’s only bogey came from a simple upshot error.

There wasn’t much more Tattar could say after taking the win to cap off one of the great seasons by any disc golfer. “I really wanted to win this one, not just because the payout but it was a great way to finish this amazing season,” she said.

I wonder when, in disc golf, we are going to say, ‘well, this year was a bit down from last year?’ It seems that every year is a quantum leap from the one that preceded it in this sport, and it doesn’t look like slowing down any time soon. Record numbers, record payouts, more tournaments, more media, and a growing industry that surrounds the sport providing a livelihood for a growing number of people. 2023 looks like it’ll be more of the same. I say don’t argue, strap in, and enjoy the ride.