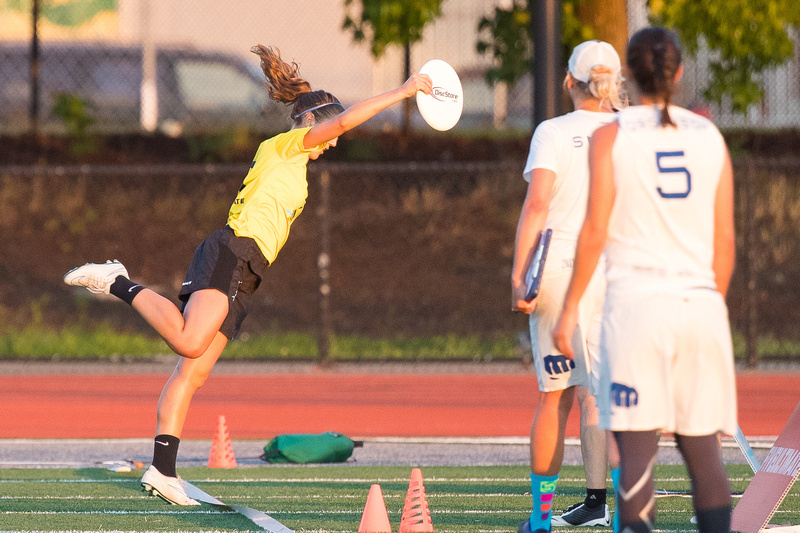 The fourth stop on the 2016 All-Star Ultimate Tour landed the college scene’s best in San Francisco, CA to play a doubleheader against the Bay Area’s two elite women’s teams, Fury and Nightlock. The games would represent the Tour’s fourth and fifth contests in a five-day span, but unlike the previous matches, these games were to be played to 11 with a twenty-minute break in between.

The first opponent up for the All-Stars was Fury, arguably the best women’s program of all time. In the first half, Fury performed up to their reputation, racing to a 6-1 halftime lead over the All-Stars. Facing mostly person defense, San Francisco’s offense ran on the strength of smooth handler play from Alex Snyder and Anna Nazarov. The primary handler duo distributed the disc well to the break side to open up the offense, while also aggressively attacking upline off of dump sets. The same could be said of Andrea Romano and Stephanie Lim, who augmented the Fury attack with breaks of their own. San Francisco’s offense, from both its D and O lines, was exceptionally clean in the first half, efficiently cashing in on All-Star turns for breaks without giving the Tour a second shot with a turnover of their own.

Down but not out, the All-Stars came out of half on fire looking to get themselves back into the game and began to work in poachier looks on defense, as well as regular cup zones. The adjustments paid immediate dividends, gumming up Fury’s downfield looks and forcing them into turnovers. A dump-set turnover 20 yards outside the Fury endzone led to the first break. On the next point, the Tour broke again, earning their turn on the strength of a Caitlin Fitzgerald layout D after transitioning out of their zone. The All-Stars continued to throw their zone look and generated another turn when Fury attempted to huck past the wall and Jenny Wei came down with a big sky. Wei then quickly dished the disc and raced down field to layout for the bookends score. The Tour stuck with their zone, this time against patient handler movement from Fury, but a throw through the cup sailed out of bounds leading to a quick deep strike from Bethany Kaylor to Sarah Edwards for a fourth straight break. Almost as quickly as they had fallen behind, the Tour narrowed the gap to 6-5.

Fury finally stopped the bleeding with a hold, but the half continued to be contested, with the All-Star Tour continuing to throw a 3-person cup zone, as well as a 2-3-2 junk set, to solid results. Lim noted as much, explaining, “they played a lot more man in the first half and had a very clean offense, we were able to move the disc side to side and use lateral movement. But in their junk, we did that less and struggled and tightened up on ourselves and threw into their poaches."

The Tour also seemed to step up its handler switching to help contain the movement of Nazarov and Snyder. Fury, for their part, stuck mostly with person defense.

The teams traded holds and a pair of breaks to 10-10. As a beautiful Bethany Kaylor huck found Shiori Ogawa in the endzone tied the score, it was announced that the game would be win by two, hard capped to 13. Fury received and held in a display of patient offense, methodically churning out yards with under cuts. The All-Star offense recorded a turn on a Jessie Shofner huck, but a Fury dump miscue gave them a second chance. Hayley Wahlroos – ever the shooter – found Kate Scarth with a pretty blade across the endzone to hold for 11s. The Fury offense received against the All-Star zone and turned the disc, but managed to regain possession and hold with an incisive throw from Snyder followed by a great continue from Sarah Carnahan.

Receiving on Fury’s game point, the All-Star Tour stuck with the same aggressive style that had gotten them to this point. A Jessie Shofner huck to a streaking Claire Revere brought the crowd to its feet, but defensive pressure from Darragh Clancy broke up the completion. Fury took a deep shot on the turn, nearly ending the game on spectacular layout from Claire Desmond that came up just short. However, a quick All-Star drop led to a short field for San Francisco, who broke to close out a 13-11 victory over the visitors.

After going down big early, the All-Stars valiantly dragged themselves back into the game by making plays up and down the roster. Jenny Wei was a defensive force for the Tour, notching a pair of big blocks, while Clare Frantz and Caitlin Fitzgerald made their presences known with highlight reel layout Ds. Add in the high-flying antics of Beth Kaylor, the fearless throwing of Hayley Wahlroos, and the always-open cutting of Kate Scarth, and the All-Star performance against Fury made for quite the spectacle to kick off the doubleheader event.

All-Stars Hang On In A Game Cut Short

After a quick twenty-minute break, highlighted by a parachute game from the All-Stars, the second game of the night kicked off against San Francisco Nightlock. The All-Stars were looking to continue their form from the second half against Fury, their best half of the Tour thusfar.

The first point was a sloppy one, featuring a handful of turnovers from both teams. Nightlock was perhaps still trying to find their rhythm for the night, while for the All-Stars, the fatigue of the games and driving of the Tour began to be a factor. Asked about the exhausting pace of the Tour, Kate Scarth noted that “Yesterday was our full driving day…this morning we felt well rested, but when it got to the second game we all felt our legs going out a little bit.”

The weather remained mildly gusty, which prompted the All-Stars to stick with junk and zone looks on defense. Nightlock seemed equal to the challenge, however, as patient handling from Sabrina Fong, Marissa Rafter, and Natasha Won guided the Bay Area team past the zone walls to a pair of holds. The All-Stars too settled down and worked the disc up the field on their offensive points, cutting tenaciously against the Nighlock person defense.

Scarth said that a point of emphasis for the team for the second game was to “make sure we were still using our legs to get open and not be lazy.” They did just that. Jessie Shofner in particular was open all day, beating her defenders deep and under. It was her strong cutting after the turn that led the All-Stars to their first break of the game, taking a 4-2 lead. Nightlock got the break right back though, capitalizing on a pair of drops from the visotors to tie it at 4s. The All-Stars held the O-point on an Oregon connection from Wahlroos to Kaylor, then managed to break for half 6-4 after Jenny Wei got a sky D from her deep position.

The Tour came down zone again out of half, and it paid off. The Nightlock zone offense that had incisively broken junk looks with throws through the cup in the first half was tempted into shooting deep again, where Wei would come up with another deep block. The All-Stars punched in the break to make it 7-4, their largest lead of the game.

The teams then traded five straight holds, with Nightlock seeming to have solved the zone, throwing to poppers through the cup. The All-Stars worked against a Nightlock flat zone with fluid side-to-side disc movement to open up holes. San Francisco continued to stick with the flat zone, and eventually got a turn to notch a break that made it 9-8, but were unable to string together a run. The Tour held for 10-8 on another zone point, sticking with their side-to-side approach to beat the junk.

The game ended on a tragic note. At 10-8, Nightlock tried to quickly escape from their own endzone by throwing a huck over the top of the All-Star zone. Jenny Wei – who had been a force in the deep space all night – skied for the block but collided with a late-arriving Laurel Oldershaw. The collision and awkward forced landing broke Oldershaw’s leg. The image of the play stunned the crowd and players alike, and after a long delay with Oldershaw prone on the field, the game was eventually called, resulting in a 10-8 victory for the All Stars. Oldershaw left in an ambulance but, amazingly, with a smile on her face. The unfortunate play was perhaps the one bad spot on what was otherwise an exciting night of women’s ultimate in the Bay Area.

With a split on the night and a 2-3 record overall during the West Coast swing, the All-Stars now face one of their longest driving stretches of their Tour. They head to Colorado, where they will face Denver’s Molly Brown on Friday.