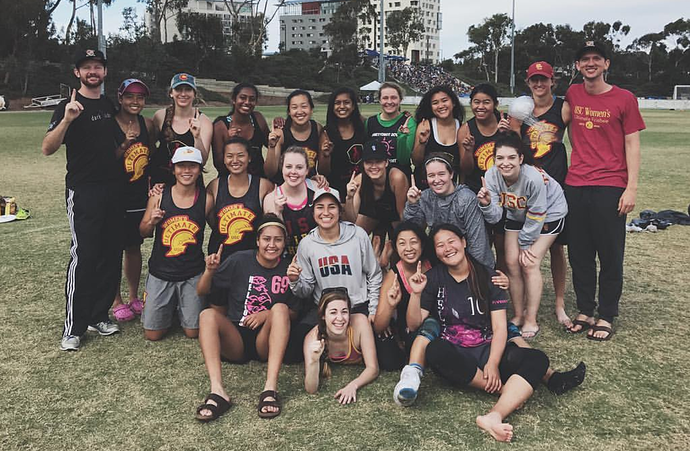 Each week during the spring season, we will publish a bite-sized weekly recap of the action across the College Division. This will serve as a supplement to our standard tournament reporting and will offer a high-level look at the latest happenings and the biggest stories of the week. Expect occasional updates throughout the fall.

Want your tournament listed here? Submit a recap of what happened right here.

Arizona defeated USC 10-8 in the finals of So Cal Warmup to reassert themselves as a Southwest challenger.

Historically, Arizona has been a Southwest standout with multiple Nationals appearances. While the region’s bigger threats (Stanford, Cal Poly, UC Davis) did not play down in San Diego this weekend, Arizona got some nice wins, including a 10-9 double game point victory over Arizona State.

#1 Oregon, #11 Washington, Utah, Western Washington, and a number of other area universities met in Eugene for the annual late fall tournament, OFUDG. With many teams playing as split squads and a number of alumni teams in attendance, the final result – a 15-13 victory for Lane Community College over an Oregon alumni team – doesn’t tell us much.

Oregon was playing split with a team of returners (made the semis) and a team of rookies plus the three captains (won their pool but lost to eventual champion 15-11 in quarters). Washington played as a single team and reached the semis.

A rainy, windy Sunday made for less than meaningful results.

We are left with few takeaways beyond what we already know: Oregon and Washington are the frontrunners in the region this year. We await the spring for a clearer picture.

USC, the third Nationals qualifier out of the four bid Southwest last year, may have proven that they deserve to be considered the #2 team in the region this season behind #1 Stanford. UCLA lost some key pieces, including Kristen Pojunis, and USC retains a very potent handler corps.

UC San Diego, who lost close to UCLA in semis, finished third with a big win over Arizona State.

#2 Whitman, #5 Oregon, #12 Western Washington, #14 Washington, and other Northwest teams came out for a weekend of final fall games at OFUDG. The tournament did not feature a bracket, but many of the top teams (some split squad) faced off over the two days.

Strong play from Oregon, WWU, and Whitman were the highlights of the weekend that featured some rough weather on Sunday.

RE: SoCal Warmup, I could be mistaken but I am pretty sure that it was San Diego State that ASU beat for third. UCSD was split up into 3 relatively even teams and I don’t think any of them made the bracket.

According to ASU’s twitter they were playing UCSD, but I play for USC and I’m pretty sure you’re right. I’m fairly certain that it was SDSU that we played in the semis but I wasn’t at the tourney though (injured) so I could be wrong.

Here’s what I heard about the final if anyone is interested: apparently the game was pretty close. Zone went up like 4-1 early, then took half 7-5. USC then broke twice out of half and had the disc 5 yards out at 9-8 when cap blew but couldn’t score to force universe. Worth noting that we were missing 2 of our best players the whole weekend and 4 starters for the final. It looks like there’s a lot of parity this year in the SW so it’ll be exciting to see how things shake out as the season goes on.