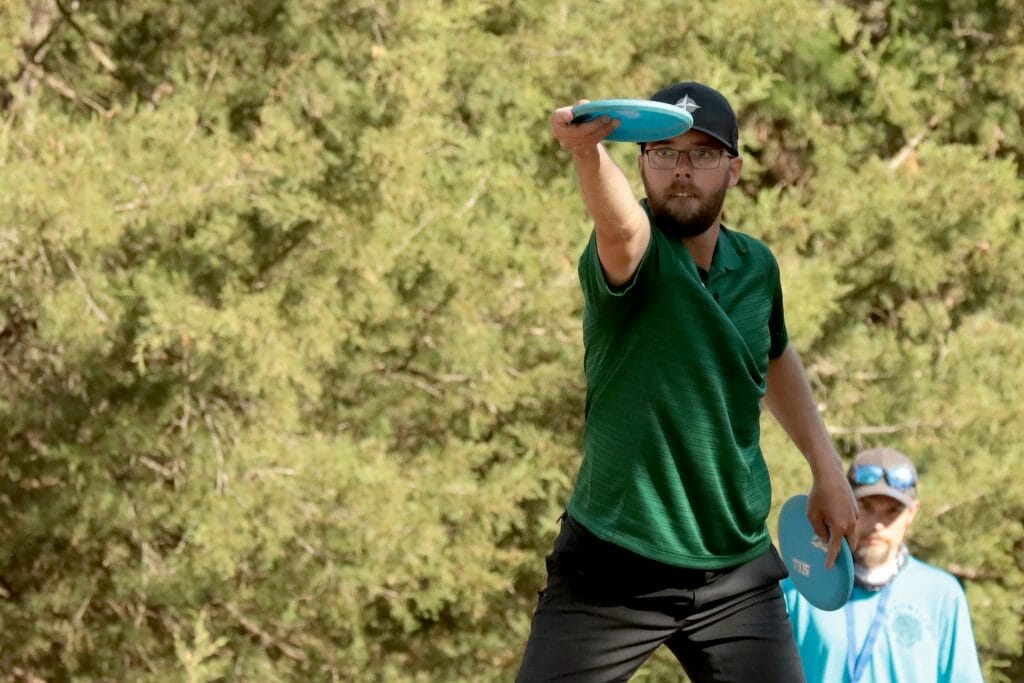 The tight lines in the woods proved treacherous for many of the Open division’s at the Delaware Disc Golf Challenge, making clean rounds hard to come by. With one round gone by, here’s what we learned.

Bradley Williams goes into day 2 at 9-under par, one stroke ahead of his nearest competition. Williams is known for being smooth off the tee, puring lines with power, and a solid putting game. He demonstrated all three on Friday, carding a rare bogey-free card after slicing up the long, narrow fairways of Iron Hill. While his driving off the tee was far from sparkling (67% fairway hits), his scramble game was flawless at 100%. Combine that with 100% Circle 1X putting, and a turkey to finish his round, and you’ve got a leader. His final stretch was a high point on the day, with the back 9 of the course playing tough as nails.

For most of the day, it looked like Austin Hannum’s early round of 8-under par would hold as the hot round, before Williams’ hot finish. However, Hannum is in an excellent position to take down the title in Delaware. Like Williams, Hannum did not suffer a bogey in his opening round, and built the blue wall on the front nine, then treading water on the back. He also boasts a perfect scramble rate, proving the importance of creativity on a course like Iron Hill. Hannum’s strongest performance came from C2 putting however, going 50%, and canning two 40-footers as well as a 60-foot bomb on the 17th. He proved his bonafides as a woods player in last year’s DGPT Championship, and will look to stay clean through the next two rounds.

Rounding out the lead card are Joel Freeman and Matt Orum, both continuing momentum in some way. Orum took down the Silver Series win at the Stafford Open last week, and Freeman played incredibly well down the stretch at Idlewild. Orum, like the leaders, also charted a 100% scramble rate to much success on Friday, while Freeman got it done with his upshot game, as he got within 10-feet of the basket on 10 holes on Friday. Freeman, along with Chandler Fry, was one of two players to record the rare eagle 3 on holes 17. Orum and Freeman remain in striking distance at 7-under par, which they share with Connor O’Reilly. O’Reilly followed the game plan, getting his strokes early including a rare birdie on the daunting hole 10, but took a bogey late on 17.

For a moment, it looked like it was Paul Ulibarri’s world, and we were just living in it. His 6-down thru 6 was filled with immaculate drives and clutch putting, but eventually the hot streak cooled off. After his stellar start, Ulibarri didn’t card a birdie for 9 holes straight. He was the talk of Friday afternoon with his start, and if he can stretch that play over an entire round, he’ll be in a great position to find himself in contention late Sunday. He’s tied in 10th with seven others at 5-under par.

It was a tale of two halves early in this tournament, as the front 9 averaged -0.54 strokes to par, while the back averaged +1.69 strokes over par. The 15th only surrendered 2 birdies on the day, and the feedback from the field early is that the closing stretch of final three holes is especially brutal, making Williams’ turkey that much more impressive. (Per @PDGAStats)

“I’ve been trending upward over the last five weeks, developing my own strengths and mental game, like learning to become a touring pro again, it’s been a long time for me. So I feel like my game is getting stronger, my mind is getting stronger, and I’m adjusting to the lifestyle. So I felt like I’m getting better every week, so that was a good win.” – Bradley Williams, on his mindset coming into this event, and how his win at last week’s Brent Hambrick Memorial Open has helped his game.