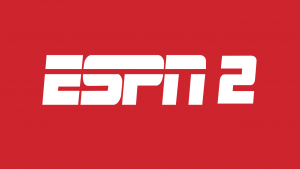 The ESPN2 broadcast of the Disc Golf Pro Tour Championship finals will air on Tuesday, November 24th, at 8 PM Eastern.

ESPN2 is available on nearly every major cable and satellite provider and streaming services like Hulu + Live TV, YouTubeTV, and Sling TV. As of April 2019, ESPN2 was estimated to be available in over 84 million homes, more than every other sports cable network besides ESPN.