Drag'N Thrust, Slow White To Face Off In Semis Rematch 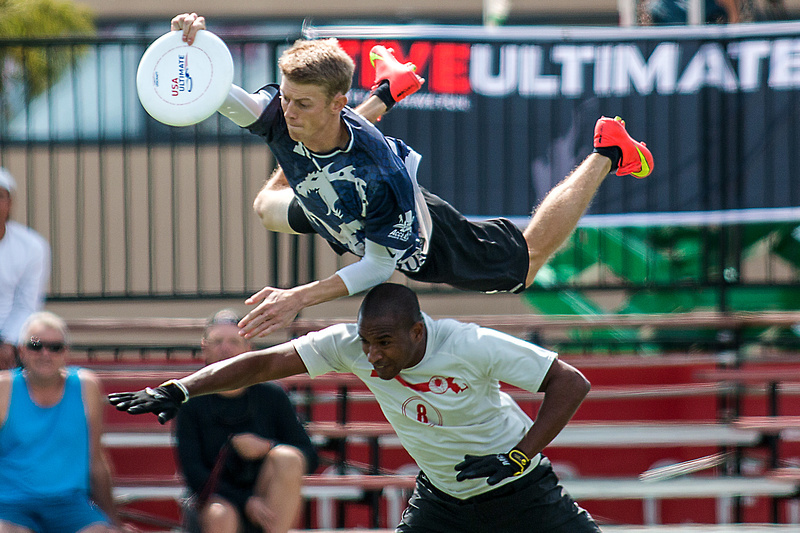 Nationals_2015_DQT_20151003_12-55_3368-ZF-6271-11962-1-001.jpg800×533 223 KB
Drag’N Thrust’s Brian “Strings” Schoenrock. Photo: Daniel Thai – UltiPhotos.com[/caption]
Ultiworld’s coverage of the 2016 Club Championships is presented by Spin Ultimate; all opinions are those of the authors. Please support the brands that make Ultiworld possible and shop at Spin Ultimate!
The first mixed semifinal, a rematch from last year's semifinal, features the team with the longest running streak of Nationals appearances (Slow White, 12) and the longest running streak of National semifinals appearances (Drag'N Thrust, 5). Both teams have been moving the disc with ease in the wind here in Rockford, albeit with different styles. Boston puts big cutters out in space and either puts up deep bombs for them to sky or finds them for big yardage on underneath cuts. Drag'N utilizes the break space a bit more, and when they huck, the disc stays lower to the ground so the speedy Drag'n receivers can chase it down.
While Slow White can tout a US Open championship and a second place Pro Flight Finale finish this year, it's important to remember that during Drag'n's three year championship run, they have never won a regular season TCT event. Boston has been relatively unfazed by the wind through four games, but they are also relatively untested defensively, having not yet faced an opponent who could move the disc through the wind with ease.
Despite the big margins in their final scores against Steamboat and Mixtape, Drag'N responded well to pressure from those opponents. Steamboat put up two separate three point runs, to which Drag'N responded with three point runs of their own. And Mixtape was able to earn two upwind breaks as well, but Minneapolis immediately earned the upwind hold and converted downwind both times.
If Boston can establish a game plan that mitigates Drag'n's offensive weapons, they could capitalize on their dominant deep threats to propel them into finals. But the Minneapolis firepower is diverse and potent, and a betting man may want to think twice before forecasting the end of their reign.
Watch the game on ESPN3 today at 11:30 Central time.