Exploring The Traditions and Cultures of Disc Golf 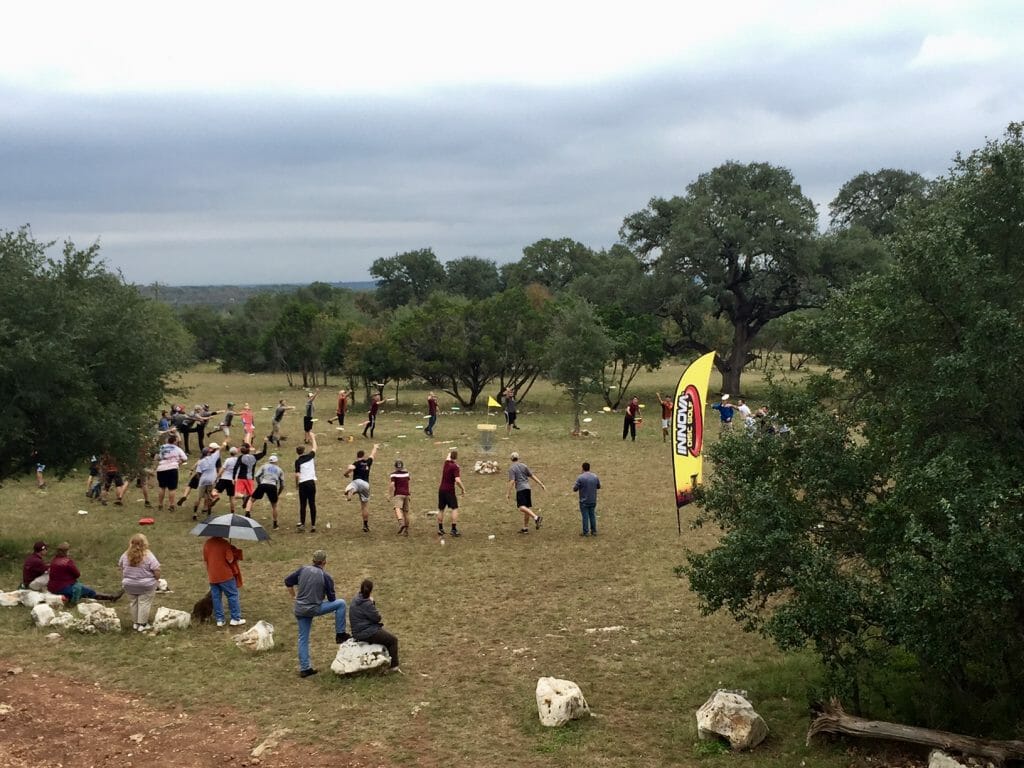 Every culture has its own unique set of traditions that help transmit its unique history, values, and ways of life on to the next generation.

Some traditions come in the form of rituals to mark the passage of time, like birthdays and harvest festivals. Others are more daily occurrences, as in a family meal or prayers at certain times of the day. Traditions can take the form of a private, deeply personal expression of belief in a set of ideas, or they can be a very public and collectively demonstrated statement that the participants belong to a given cultural identity. Every culture and sub-culture has their traditions, including sports.

The Major League Baseball All-Star Break traditionally takes place around the middle point of the season, late June to mid-July. Elite level soccer clubs traditionally take the pitch in the company of youngsters before big matches. The Toronto Maple Leaves traditionally suck. All of these traditions convey something about the values, history, and culture of the sport both globally and locally.

In disc golf, our traditions are relatively young and still in the process of forming. We have the high fives on the 18th tee and compulsive disc buying, perhaps more so than practicing form and putting. We also have tournaments. As Gabe LaBounty discussed on the latest episode of Roots of Flight, long running tournaments like the Wintertime Open and the Norman Pro-Am have become traditions for locals and touring pros alike. These events get marked off on calendars once they’re announced and fill up quickly. They endure and succeed because there is something about them– maybe the course, maybe the time of year, maybe the organizers–that have transcendent qualities. Christmas isn’t just the 25th of December, after all.

Traditions are excellent at conveying the values held by members of a culture to those on the outside and those joining the culture — and at reinforcing values to those who are already members of the group. They also tend to imply a set of values which tend to suggest proper behavior within the culture in question. That is how we end up with the “unwritten rules” in so many sports, and the overarching and wonderfully universal concept of sportsmanship.

Given that disc golf, with the notable exception of the Elite Series, is still most popular on the local level, let’s spend some time looking at and thinking about local traditions. As with so many things, Reddit’s r/discgolf has a thread on the subject.

If you say “nice” about a throw in the air, you’ve cursed it to hit a tree.

There’s a hollow tree in Penn Valley that you have to throw a quarter in if you hit it on your drive.

If someone throws a shot and it lands on top of someone else’s disc, the person who threw it owes the other a beer.

Back in Missouri, we’d play Pin Money, which is an extension of 5/1 or you could play it instead as 25 cents for a bullseye (10ft to pin), 50 cents for 5ft to pin, 75 cents for 1ft or closer to pin. Pretty fun but no one in my normal group will play, likely because we play pro tees pretty much all the time.

In the NJ/PA/DE area and maybe other places too, we have The Cubby Selfie. Named for the late great Lt. Carl ‘Cubby’ Cubbedge. The man was a legend in his own time, hitting almost 600 aces and playing sometimes 10 rounds a day. He’d always welcome people that wanted to play with him, he did live commentary during your round if you played with him, and was good at it. But one thing everyone knew him for was that he’d take a group selfie with his card on the last holes basket after every single round and post it to facebook. Many people still carry on this tradition of the Cubby Selfie after tournament rounds and casual rounds alike.

When you are walking down the hill on 17 at Kentwood in Raleigh, you must sacrifice a nice rock to the pile under the tree. Kentwood law.

I once played past a group of guys who kept their booze in a trash bag that they called “Martha” and whoever lost the previous hole had to carry Martha in addition to their discs.

Nobody plays the short tee off 18 at Elver in Madison.

There are many more examples in the thread, which is full of fun ideas that can almost certainly be applied to any course or group out there. A couple of common notes: the traditions include some unique aspect or location on a course or include a social aspect which helps build and reinforce a sense of community at the course or among the people you are playing with.

These traditions, regardless of how silly or beer-soaked some of them are, help to reinforce some ideas — disc golf is social, and there is an ingrained sense of ethics and code of conduct for playing as a member of the community. “Niceing” is a no-no, putting a rock under the tree helps beautify and make the course more unique, you gotta pay up in skins matches, and carrying Martha is a duty.

Perhaps unsurprisingly, many of the traditions we see in disc golf are carry-overs from ultimate frisbee and golf, though disc golf has given these traditions their own spin. Pun very much intended.

Styles of play, like skins and doubles, are clear carryovers from golf. The much loved and sometimes maligned Spirit of the Game including self-officiating is a good example of how disc golf has borrowed traditions from ultimate.

Adapting customs and traditions from neighboring cultures is nothing new, both in sports and in cultures writ-large: it’s no mistake that many holidays in the major monotheistic religions of today occupy roughly the same spots on the calendar as their predecessors.

For better or worse, disc golf’s counter-cultural roots have significantly informed the sorts of customs that have endured to this day. Some of them are diametrically opposed to the customs and ways-of-behaving we see in our cousin sports.

One clear example is the issue of dress code and cost of entry. Most golf courses, and nearly every private or club course, require that players adhere to a certain dress code, pay membership dues, and observe strict codes of conduct. While drinking and tobacco consumption are certainly welcome on many-a-links, the regular cannabis use, tee-shirts, and loud celebrations we see on disc golf courses are verboten on a country club golf course. Additionally, disc golf has a low cost of entry, and free-to-play courses vastly outnumber pay-to-play ones. The low cost of equipment makes the game accessible to everyone, which is both a blessing and a curse, a financial catch-22. It takes money to make money, and disc golf has a long and loudly proud tradition of being a low cost activity open to all…so long as they don’t break any of disc golf’s unwritten rules.

Disc golf is a fledgling global sport with a strong presence in Scandinavia and a foothold in Asia. Despite the growing popularity of the professional game we’ve seen in recent years, the local scene remains the financial and cultural life blood of disc golf. For better or worse, the PDGA does not have a particularly muscular presence in local scenes beyond sanctioning tournaments. This relatively hands off approach has its pluses and minuses, to be sure, but one could argue that by staying out of the weeds, the PDGA has allowed for local traditions, styles, and cultures to flourish.

Jeff Iliff, by way of the Disc Golf History Facebook page, said, “I started the ‘woo’ in Minnesota as a way to get your group to encourage each other rather than hope they missed so you could win. After everyone birdies, the group surrounds the basket, rings the chains, joins hands, and makes a wooo’ sound that vibrates the chains with birdie juju for the next group.”

If you’re from Minnesota and somehow end up playing in Finland, you might be right at home in celebrating a star-frame by shaking the chains and cheering with your card mates. If you watched the 2019 European Open, you saw the players shake the chains as a group after a star frame.

When a player from, say, Massachusetts travels to San Diego, what might he or she see and bring back to New England?

“Kick the dirt by the tee pad, and see which way the wind is blowing and say ‘San Diego Wind check,” says Johnny Katsigenis.

Cultures and traditions are organic and evolve over time and as they spread. Traditions should help remind people of where they came from, and whether or not they should change as the world changes around them is a subject of debate in almost every culture and society. For disc golf, the tension points between tradition and change are becoming more clear every day. As the sport grows, how much of the counter culture tradition will hang on at the professional level remains to be seen, and how many of the traditional infrastructure of the game (for example, TDs working for free) will change at the local level.

It does seem clear, though, that as the game becomes more popular, new traditions will be born and old ones will evolve. Hopefully, the spirit of camaraderie and fellowship that makes the game so unique will be here to stay.