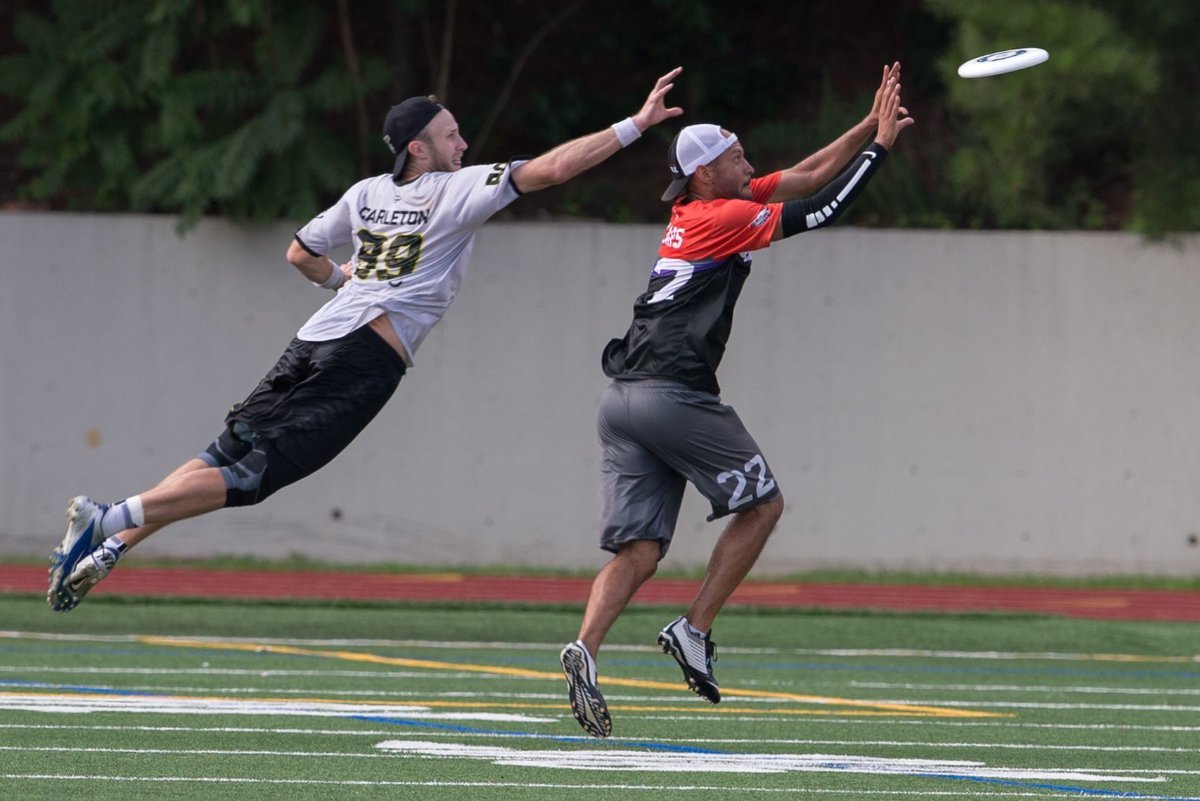 jacksonville-bid.jpg1200×801 125 KB
A photograph of the play in question. Photo: Judy Stapleton.[/caption]

In last weekend’s final AUDL regular season game between the Jacksonville Cannons and the Atlanta Hustle, Jacksonville’s Andrew Carleton got ejected from the game ((Dusty Smith was the referee that ejected Carleton.)) for this bid into Atlanta’s Sean Sears (who was concussed on the play):

Yesterday, Bama Secs tweeted about the play, which brought it to the attention of the wider ultimate world:

Four minutes later, the Jacksonville Cannons responded, setting off a firestorm on Twitter, Reddit, and other social media sites:

Aside from being simply untrue (Sears clearly reached the disc first), the Cannons account seems to suggest that the play would be justified even if Carleton had reached the disc first. Under the AUDL rulebook, that is patently false: creating unavoidable heavy contact with an opponent is a foul. And if there is “immediate danger to the players involved,” it is a 20 yard penalty and a possible ejection.

The Cannons later retracted the claim that Carleton reached the disc first, but then issued an official statement on Facebook that seemed to again suggest that the play was clean, or at least justifiable. Here is the full text of the team’s statement:

The Jacksonville Cannons hold the safety of all participants, including but not limited to fans, staff, officials and players, as our number one priority.

All players are responsible for maintaining a safe disposition at all times.

During game play, when the disc is in the air, all players on the field have a right to possession.

The motion each player made was not unnatural to the play at hand. Both held their heads up, tracking the disc, eventually extending the closest arm to make a play on the disc. Both players made a direct line for the disc at all times and never at all attempted to create contact with the opposing player. There is no doubt contact occurred. It is clear that the contact is unintentional, as both players continue a direct line for the disc. The impact itself did not have any secondary emphasis to it, confirming neither player was intending to deliver a punishing blow of any sort.

Cannons #99 Andrew Carleton made a play on the disc and it was considered worthy of an ejection by the referee. While we disagree that the play was worthy of ejection, feeling he made a play on a free disc, we accept the call and consider it a closed matter.

Reaction from ultimate players and fans has been almost entirely negative. Here’s a sampling of Twitter responses:
[View the story "Jax Responses" on Storify]
Suggestions that Jacksonville has a culture of bad on-field behavior seem justified by anecdotal evidence. Many AUDL South Division teams have complained about the Cannons' play this season and the team has been called for numerous flagrant fouls.

“The league reviewed the play and we agreed with the referee’s decision to eject the player,” said the AUDL Director of Marketing Tim DeByl. “At the league level we capture video of every game, and will review instances of dangerous plays brought to our attention from players/coaches and even fans. We also track all ejections throughout the season. The league can suspend players or fine teams when it feels it is necessary.”

No fines or suspensions have been levied for Carleton’s bid. The only suspension this season was handed down to Jacksonville’s coach, Tuba Benson-Jaja. He made contact with a referee after last season’s playoff loss and was suspended for the season opener this year. Last year, a Nashville Nightwatch player was suspended for making an intentional dangerous bid.

After a request from Ultiworld, the AUDL declined to share the flagrant foul and ejection totals for the 2016 season.

Many online, including Dallas Roughnecks owner and Philadelphia Phoenix minority stakeholder Jim Gerencser, have called for fines or further sanctions on the team.

UPDATE (7/13): Jacksonville released another statement on their Facebook page this afternoon. Here is the full text:

As we stated this morning, the Cannons hold the safety of everyone, especially the players, as of paramount importance and will continue to work with the league to ensure their safety.

“After a request from Ultiworld, the AUDL declined to share the flagrant foul and ejection totals for the 2016 season.”

What’s more likely - they aren’t tracking it or they know it’s embarrassing enough not to share?

Before we get out the pitchforks, let’s compare how the parties involved responded to this: 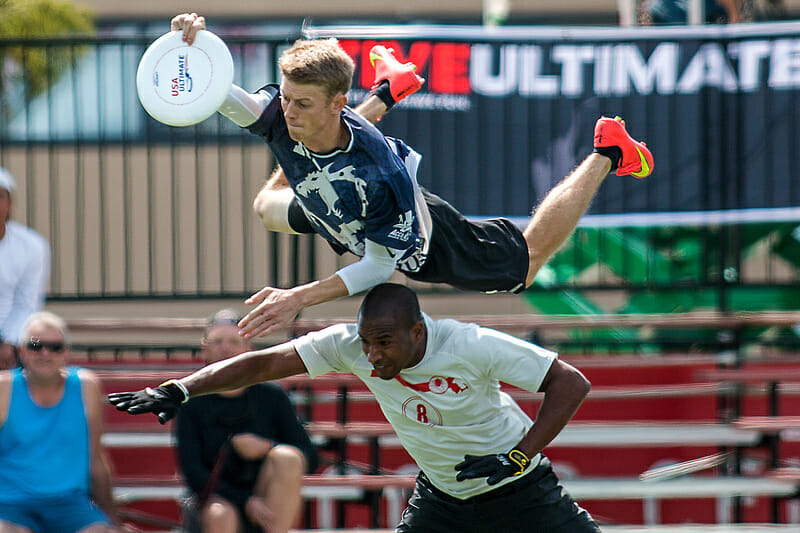 How exciting does a foul have to be for it to make the highlight reel?

AUDL: stood by the ejection
USAU: promoted it as a highlight

Ok, to start, we have the players who have a culture of these bids, and not all showing any remorse (at least one the field) for these players. This is judging from the ‘highlights’ of these maniacal bids.

Then you have the team/ownership, who is enabling all of this behavior. Admittedly, the AUDL is mostly owned by regular shmoes, so it’s not like Robert Kraft coming out saying these crazy things, but as others pointed out…if the AUDL wants to be perceived as professional, the owners/social media need to act like it.

And then finally, The AUDL, who seem to have mostly escaped criticism. They are actually the most culpable, from my perspective. I live on the West Coast, so I don’t follow along with all the teams across the US. But the AUDL should be actively monitoring all of these incidents, and it’s plain that they haven’t attempted to curtail this behavior in any significant manner, otherwise, this team wouldn’t do this crazy stuff.

Very disappointing all around.

I’m one of the captains for NY Empire, and I just want to mention that before every coin flip both home and on the road the refs in the East division have mentioned specifically that they do not want to see dangerous bids, regardless of “who gets to the disc first”. They made it clear that harsh penalties were possible, including an ejection if a player didn’t take into account the safety of their peers on the field. So the AUDL, from my perspective, seems to have this stuff on their radar and wants the game to be played safely and “the right way”.

I also think it is worth noting that in all of our games, home and away, we only really saw 1 or 2 bids that were dangerous all season long, but they were not anything remotely close to the dangerous play in the video above. I would commend all the teams in the East for playing safely and respecting each other on the field this season.

Not sure I take much away from this. The JAX play was far worse on the face of it. So, for example, are you suggesting that the AUDL refs might have ejected the Drag’N Thrust player? Or that the AUDL would have promoted the JAX play as a highlight? If not, then what’s your point?

Lol come on bro. No way you are that dense. Stop trolling.

The obvious point he is making is the hypocrisy of people (both USA Ultimate and players) flipping out over the Jax play while not only being ok with, but CELEBRATING, the DnT play.

I agree with you - I don’t think I’m that dense. And I’m definitely not trolling, though maybe I left too much between the lines for some people. Please answer my questions:

And to further connect the dots, unless you disagree with those answers, then the point is there is not necessarily hypocrisy in play.

If you disagree with those answers, then please justify your point of view.

You commented acting like you were confused by what he meant…which we both know full well you weren’t.

I personally don’t care enough to answer your questions. I just wanted to call you out on that dumb reply to him…where, again, you acted like you didn’t know what his point was when you did.

So now that you have admitted you know what his point was…do you want to respond to it? Before putting out your own questions.

I’ll leave ya to it.

“far worse”? Flo Pfender, member of the SRC, talking about the Schoenrock incident:

“I am on the rules committee, and we have not talked about this yet. But in my mind, there is absolutely no question that this was both a foul and a dangerous play (emphasis mine). It is not anywhere close to a grey line. We could use this in a video explanation to show a very clear dangerous play. We could use this also for a situation where it is clear who initiated the contact between two running players.”

The point is to expose those who are claiming “holier than thou” status between the two entities (USAU and AUDL) as if that one AUDL play encapsulates everything that is wrong with ultimate and is specific to pro leagues.

Your questions are decidedly impertinent to that point.