Jomez Productions Just Redefined The 'In The Bag' Game

The team at Jomez Productions is at it again.

Simply put, it took the standard “In the Bag” fare and completely turned it on its head. In just under 24 hours since being released, the video has already garnered nearly 20,000 views on YouTube.

We caught up with the crew behind the video - which includes executive producer Jonathan Gomez, camera operator and graphics assistant Michael Fouche, and creative director Juan Garcia of Overstable Studios - to get some more insight into the bar-raising production.

By far, this is the most in-depth “In the Bag” video disc golf has seen. It has a bit of a “Sports Science” vibe. Is that where the design inspiration came from, or was there somewhere else you looked to?

Jonathan Gomez, executive producer: Juan from Overstable Studios was the creative director for this project. I’ll let him answer this one.

Juan Garcia, creative director: There were many points that needed to be addressed with the interface and how the graphics delivered the information. Finding the right disc can be as easy as a suggestion from a friend to an extensive search where you’re investigating manufacturers, flight numbers, weights, plastics, runs, reviews, etc. We wanted to embrace all of that and give the viewer an approachable, concise, but detailed packet for each disc so they can consider whether it would be right for them. As for the aesthetic, we arrived at a clean and robust system that leaned a bit scientific/infographic. Disc golf can be as analog or digital as you want it to be, but the Jomez Pro brand has a certain feel and ultimately we leaned in that direction.

What was each of your responsibilities in the process?

Jonathan Gomez: Michael, Jerry [Gomez, production assistant], and I shot the entire video at the Emporia Country Club while at this year’s Pro Worlds. I edited the video, selected the music, secured sponsorship, and acted as director and executive producer. Michael created all of the shot trackers for every disc in the bag, composed the motion tracking data for the disc close-up graphics, mixed Paul’s audio, and color graded all of the various camera angles. Juan was responsible for just about every single piece of eye candy throughout the video. He took photos as well as built the intro, credits, and all of the graphics from scratch. When you pay attention to every little number, logo, and piece of information in the entire video, you realize it’s an incredible undertaking, and these guys absolutely killed it as always.

There are always questions about the shot tracker. What kind of program are you using for that, and what’s the per-shot processing time? 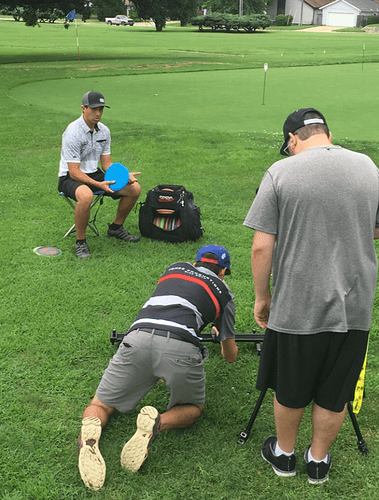 Michael Fouche, graphics assistant: After Effects is used to create the shot tracker. No external plugins are required to create the effect. The processing time can be any where from about 15 to 45 minutes per shot, depending on the complexity and length the shot.

How many hours would you say the entire video took to produce, with all three of your hours combined?

Jonathan Gomez: I estimate that we each put around 40 hours of work into this project. So, about 120 total hours between the three of us.

In that vein, why put so much time and effort into an “In the Bag” video? Why not go with a style that has been out there before and save some of the effort?

Jonathan Gomez: We’ve never attempted an “In the Bag” video before, but I knew that if we were going to take on this project with Paul, we were going to give it our best effort. I am fortunate to work with some of the hardest-working, detail-oriented guys I know. I had a vision for what I wanted this video to look like from the very beginning, but without the right team it would’ve been nothing more than an idea. Michael and Juan were able to bring those ideas to life in what has become more than what I could have ever accomplished alone. We wanted to take the traditional “In the Bag” style and elevate it to a more in-depth and informative experience for the fans. We hope it will also open a new avenue for manufacturers to showcase their products to consumers beyond traditional advertising. By no means are we 100 percent satisfied with this first attempt, but we feel that it is a great start as we gauge the feedback and look forward to next season.

For the budding videographers out there, can you give us a rundown of your equipment setup?

Jonathan Gomez: We shot with the Sony FS7, Sony A7Sii, and the DJI Phantom 4 Drone. We use Adobe Premiere and After Effects for editing and composition.

What’s the response been like so far? Have you had any feedback from McBeth or Innova?

Jonathan Gomez: The response has been incredible so far. We’ve received great feedback and tremendous support from the fans. This is the hottest release in the history of the channel – 16,000-plus views in the first 12 hours – which speaks to us as a positive reinforcement as we look forward to future projects in 2017. As for Paul and the crew at Innova, they have been very supportive of us well before we took on this project and we are always honored to have the opportunity to represent them with our work. I also need to thank Josh at Booom and John at Supreme Flight for supporting us in this project.

What can fans expect next from Jomez Pro?

Jonathan Gomez: I never know quite what to expect as we look forward to a new season, but I can promise that we will continue to give our very best to this sport that has been so good to us. We are so grateful for all of the support we have received from fans, players, and sponsors in these few short years, and I am excited to see what we can accomplish in 2017.