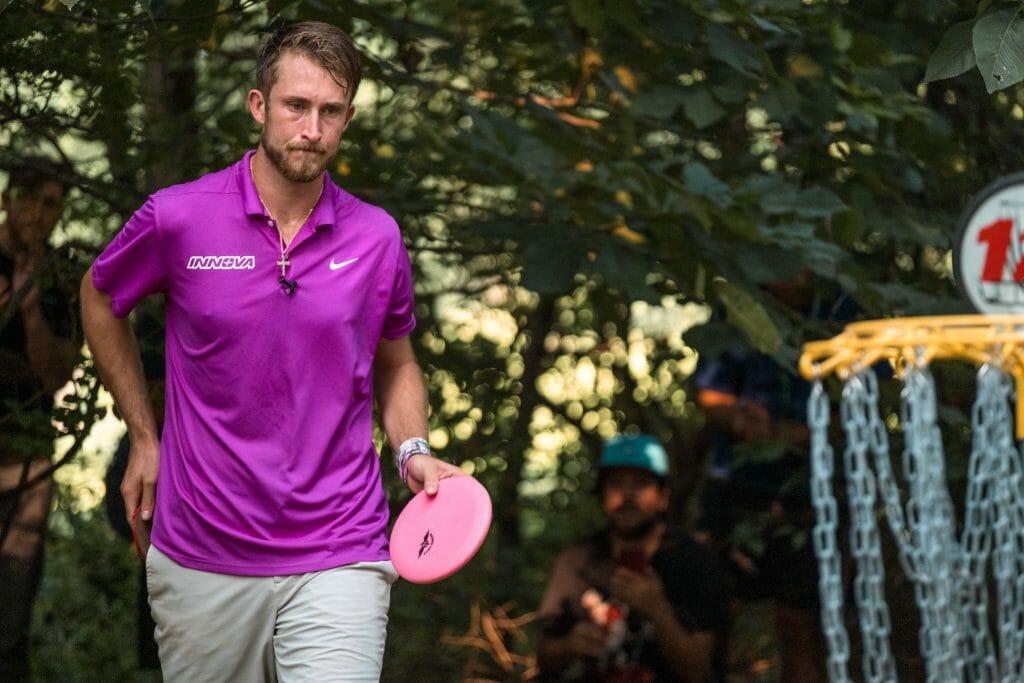 One week after the threat of a final round cancellation at The Preserve Championship, the Open division final round at the 2021 Ledgestone Insurance Open was cancelled due to severe weather. Round three results were made final, crowning Ricky Wysocki and Calvin Heimburg co-champions of the event. Eagle McMahon finished third.

Wysocki won last week’s Preserve and said then he was prepared for the results to be made final after two completed rounds in Minnesota, but that it felt nice to go out and earn a victory.

Sunday’s cancellation at Ledgestone was a bit different than the potential at Preserve. All cards had teed off in Peoria for the final round, and play was originally suspended due to weather with the lead card, which included Heimburg, Wysocki, McMahon, and Andrew Marwede, having completed three holes.

Tournament staff and the DGPT cancelled the final round and reverted scores to the last completed round, per the PDGA’s Mid-Event Weather Suspension & Cancellation Guidelines. The guidelines outline the decision making process to cancel events and required milestones for rounds to be completed, as well as a first place tie scenario, that reads:

Under no circumstances should any non-sudden-death playoff criteria such as hot round, head-to-head scores, etc. be used to break first-place ties.

Under no circumstances should players be expected, or asked, to return on a day following the last day of the regular scheduled rounds to conduct a sudden-death playoff.”

Ledgestone has one of the deeper professional fields on the entire Tour at 160+ in MPO, and a final day cut was not instituted for the four round event. The large division made it difficult to have the leaders tee-off earlier in the day.

“It was a bittersweet ending for the team not to be able to award the title last night,” said the tournament staff. “But please know that we did everything within our power to try to safely make it work, including trying to look at a Monday finish. The one thing we cannot control is weather.”

Fans, and some players, were vocal in their displeasure of not seeing a complete round on Sunday, but those who were fighting for the podium mostly seemed to take it in stride.

Wysocki: “This is the first time something like this is happened to me during an event and hopefully it’ll be the last time. Eureka is a great property and somewhere I look forward to playing every year so having it cut short for weather is a little disappointing for everyone. That being said, I’m lucky enough to be able to hoist the trophy alongside my teammate @cheimborg, you played amazing golf man.”

Klein: “Obviously I wanted to win, but the way the rules line up, it wasn’t able to happen like that. I was still able to grab a 6th place finish.”

McMahon: “The final round was unfortunately cancelled due to severe weather. I ended up in 3rd place, one stroke back of the co-champions, @cheimborg & @sockibomb13. This makes two events in a row that I missed the top spot by one stroke. It definitely stings a bit but it also makes me hungrier moving forward. The amount you learn about yourself and life out on the course never fails to amaze me… That said, congratulations to the both the co-champs for hunkering down and staying ahead of the field.”

Marwede: “Super bummed to not be able to finish the event on lead card by @jomezpro but overall stoked to get 4th place and got my invitation to USDGC!”

Drew Gibson: “Wow, what a week! From making SportsCenter Top 10 to not being able to complete final round was sure a rollercoaster of emotion in a 24 hour span. I’m just happy I was able to play like I know I should and be in contention this week. Thankfully I was able to snag 4th and my 5th top 5 finish of the season.”