Welcome to Ultiworld Disc Golf’s brand new mailbag! You don’t necessarily see my byline around here too much — I am more often behind the scenes as the publisher, but I’m still here as a co-host of the Upshot podcast with Jamie Thomas and I generally report from Worlds and USDGC every year.

Now, you’ll see my thoughts in print every week in the mailbag.

Generally, the mailbag will be for subscribers only (here’s our announcement about the new subscription), which helps keep me committed to writing it every week. It will reward subscribers with a weekly column they can count on. And it will allow us to offer a free one-month Mini subscription for the best question, email, or comment we get and publish in the Mailbag. If you’re already a subscriber, you get a free extra month (or a discount). If you’re not, you can come in and check out the benefits.

The first couple questions this week, though, are available for everyone for free!

Q: The tiered pricing is comical. $4 for the basic plan, an extra $9 if I want to watch old Ultimate videos, and $16 more if I want zero ads? If the people in charge of this company think that’s a good subscription plan, they will be outta business soon. I appreciate the effort, but this is garbage.

Q: Are they really going to be creating enough extra content to support a subscription service? As much as I love it, Disc Golf is still a small sport. There just isn’t that much to talk about. Maybe they’re just hoping people take it from a patron angle where they are ok with paying just to support all of the work Ultiworld does, paywalled and not?

Q: I like Ultiworld, but think they are underestimating how cheap disc golfers can be. Remember the uproar about USDGC last year? And that was an actual tournament, not just related content.

Q: The coverage they already have is just a rehash of what I saw on reddit the day before and lacks depth. I don’t see much value in what they’re offering.

A: All of the above comments and questions come from the Reddit thread about the subscription announcement.

So, there’s a bunch of stuff to address here, and I’ll try to do my best to be complete without rambling. I should have done a better job describing some of this in the initial post about the subscription.

First of all, we’ve had some form of a subscription for the ultimate site for many years, and for about three years in its current, three-tier form (Mini / Full / Plus). The plan was always to eventually create a subscription for the disc golf site, as what we’ve learned after covering disc sports for nearly eight years is that the only way to remain independent and financially solvent is to ask readers to support our work. Now, we’re not asking for a giveaway or charity — we’ve worked really hard to develop high quality benefits for the subscription, and a lot of what we learned developing the ultimate subscription informs what we will do in disc golf.

So…why the heck would anyone pay $12.99 or $19.99 a month for the disc golf Full or Plus subscription? They wouldn’t — I don’t expect almost anyone to do so. The only reason those options really exist, to be honest, is that it allows us to keep everything technologically simple. We have a single subscription that covers ultimate and disc golf. The payment processing stays simple. We can offer reciprocal benefits to fans of both sports under one account and login. There are a host of reasons we decided to do it this way.

So we’re not trying to insult your intelligence by suggesting that you should pay $19.99 a month for not much additional benefit.

We’ve built the disc golf subscription to be $3.99 a month. You get almost all of the benefits — exclusive articles, this mailbag, bonus Upshot segments, a forthcoming email newsletter covering business and sport development, no ads on mobile devices, AND access to our Slack community.1 If you don’t care about ultimate, then the Mini is what you should get, unless you’re feeling extra generous.2

Now, are there going to be readers who say, ‘Hell no, I’m not paying you anything.’ Of course. That’s ok. We plan to make the subscription easily worth the $3.99 a month. If you don’t think it’s worth it, unsubscribe and email me why. We want to make a site that helps grow the sport of disc golf. If it’s not good enough to be worth a few bucks a month, then we have to do better.

As a part of this subscription launch, we are investing more than ever in our reporting and analysis this year. We want to tell important stories and break ground in understanding the game. There’s always going to be an element of “rehashing” (we call it aggregating) news that pops up online (and gets posted to Reddit) — not everybody reads Reddit and it’s important to cover news even if we don’t break it — but we are also going to work harder to tell stories first and dig deeper to give important context.

Give it a try. Subscribe. Or send me a sweet mailbag question so you can win a free month!

Q: With the 2020 season just about to get started, who do you think is primed to have a big year? Are we set up for more dominance from Paul McBeth and Paige Pierce, or will things shake up this year?

A: Well, I guess we’re getting started with the big questions right off the jump, aren’t we?

My initial read on the upcoming year is that we will see more competitive balance and a wide open race for Player of the Year. When the top two ranked players in the world — Paul McBeth and Ricky Wysocki — both have major question marks coming into the year and the next generation of talented female players looks ready to grab the crown, you’d be crazy not to expect more surprises.

McBeth is coming off a historic season, but the ankle injury which torpedoed his shot at another USDGC title in October has lingered all offseason. With the looming potential of skipping much of the second half of the year (including USDGC) to fully recover from the injury, that already limits the upside of his season. But it’s hard not to wonder whether he will be at 100% at any point this year. He’s been stuck in a walking boot for weeks. He’s still been out throwing forehands and smashing putts, but with so little intensity and volume on the lower body, I expect some issues in the early season.

Don’t misunderstand: McBeth at, say, 85% is still a threat to win tournaments. But these gaudy results from last year… 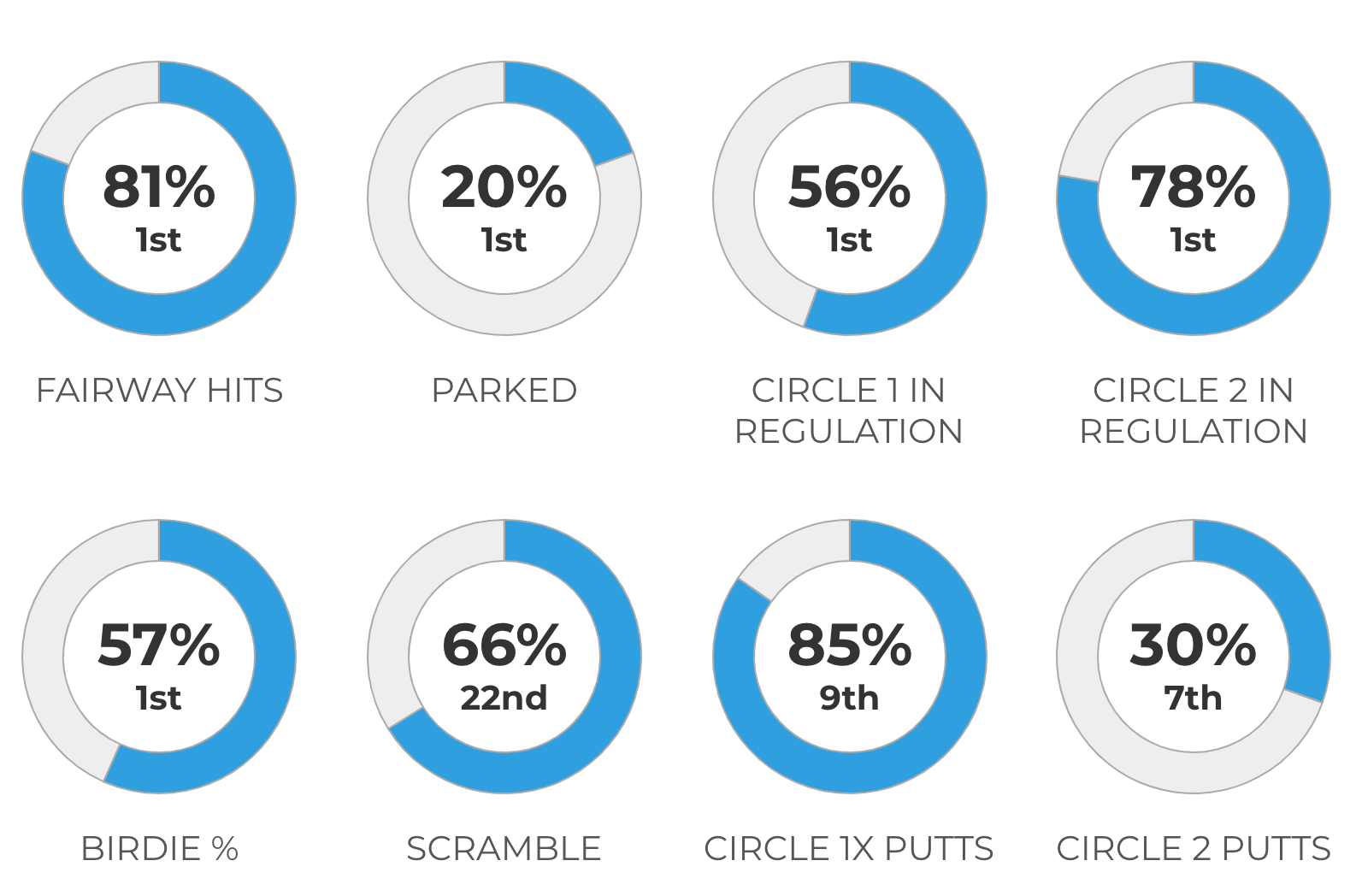 …I can’t see being quite as good.

I expect major pressure to come from Eagle and Simon, as always. James Conrad’s game looked so sharp at the end of last year. Kevin Jones’ stats were up across the board last year, even as he adjusted to playing with Prodigy.

Can Calvin Heimburg continue his ascent as one of the most exciting young talents? He went from around 30th on tour in C1/C2 in regulation in 2018 to around 10th last year, helping him win the National Tour points series. When you watch him play, you see some real ‘wow’ moments that make you think he’s the best player on the course that day. If he can find some more consistency and continues on his trajectory…look out.

And what to make of Ricky Wysocki? He’s definitely looking healthier in recent appearances on social media, but he was really down and out there for a few months with lyme disease. It can take a real toll, and with the potential of recurring symptoms, I don’t think you can bank on peak Ricky.

Also, is a Nikko comeback gonna be a thing?? He had a lot of top 10 finishes in the second half last year…

In FPO, I suspect Paige Pierce will continue to shoot the lights out with Discraft. She’s played with their discs before, so whatever learning curve there is is less steep, and McBeth showed us in 2019 that a top tier player can not only adjust quickly but shine with new plastic.

But the fact is that the young talent bubbling up in Europe — Kristin Tattar, Eveliina Salonen, Henna Blomroos — is already here to win. Tattar won USWDGC just a few months ago. The early jitters of competing in US majors will subside and the skill will continue to rise.

And don’t count out Catrina Allen, who was absolutely tremendous last season everywhere but on the putting green. If she has managed to just get back to average in her offseason training, she will be winning a lot again this year.

I expect lots of tight final round battles and more varied winners.

The door is open for some of the young players — the teenagers and young 20 somethings — to start to shift the tide and push us into a new era of disc golf.

Q: What do you make of all the Disc Golf Pro Tour changes since Jeff Spring took over from Steve Dodge? They seem like they’ve been pretty aggressive with hiring and getting positioned for a more robust start than last year’s disastrous beginnings.

A: It definitely feels like there’s been a green light to spend some real money this year and make some broad changes to shore up some of the problems the tour had last year.

Bring back Jomez for every event. Check.

There’s a lot more professionalism to what we’ve seen in the last three months than what was commonplace under Dodge’s tenure.

But I guess the big question I have remains similar to what it’s been the last couple of years: is this a sustainable thing? The Tour’s path towards making money still feels a bit tenuous. It seems that selling media rights, finding major sponsorship, and selling tickets at events are the most likely drivers of revenue. Securing a major sponsor feels more possible now than it did before, but I get the sense that Jomez is in the best position to land big sponsors rather than the Tour itself.

To some extent, the DGPT just has to work to get bigger and better and hope that it unlocks opportunities on the revenue side. They’re clearly working hard to put out great coverage — with livestreaming at every event, unlike PDGA NTs — and I’m sure people will tune in.

But, for now, all of the positive changes have more to do with operations and optics than with the fundamentals of the business case.