Molly Brown Come From Behind To Knock Off All-Stars 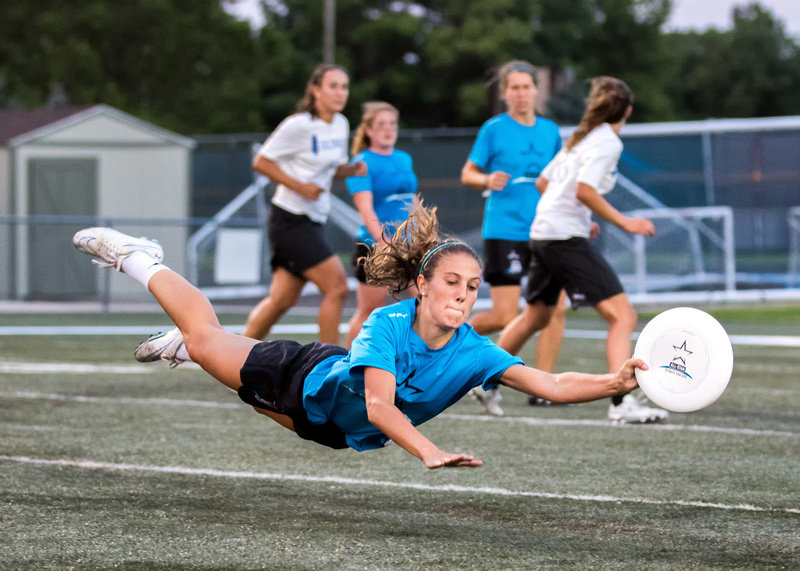 This article was written by guest author Nikki Roth, a player for Denver Sweet Action.

On the eve of USAU’s Pro-Elite Challenge, Club ultimate players from around the country packed the stands in Colorado to watch the All-Star Ultimate Tour take on Denver’s own, Molly Brown. In an exciting finish in the sixth matchup of the Tour, the hometown team completed a dramatic come-from-behind win over the All-Stars, recovering from an 8-3 deficit at the half. With the loss, the All-Stars now find themselves with a 2-4 record midway through their 2016 Tour.

Despite having only 15 players in uniform Friday night, the All-Stars’ D line struck first. After Molly Brown failed to convert on a number of red zone attempts, a break-mark huck from Jesse Shofner to a Jenny Wei layout score gave the Tour a break on the game’s opening point. Molly Brown answered with a quick hold, but their defensive line had no answer for an incredible layout from the All-Stars’ international powerhouse, Shiori Ogawa.

Throughout the first half, the All-Stars made athletic plays and were able to capitalize on a series of uncharacteristic Molly Brown turnovers to take a commanding 8-3 lead into the break.

Molly Brown came out of the half on D with a quick zone look and then fell into their person-to-person defense – a transition which generated a turnover and led to a goal for the hometown team. Molly’s varied defensive looks were finally able to slow the All-Stars and Denver put together four unanswered scores to tie the game at 8-8. An incredible point block from Alicia White on Molly’s endzone line set Claire Chastain up for a gorgeous around break to give Molly Brown their first advantage of the game at 9-8.

As the wind started to become more of factor, the All-Stars were able to put together a small run of their own behind a zone defense look to reclaim the lead, 11-9. The wind continued to gust and create challenges for both teams as excitement mounted late in the game.

A bit of sloppy play as the sun set in the Mile High City resulted in a long point that Molly Brown would eventually come away with to keep the game within reach. An incredible layout D from Claire Chastain fired up the crowd and the Molly Brown bench. As fatigue started to set in for both teams, another multi-turnover point followed, though this time it was the All-Stars who punched it in to restore their two-point lead.

Capitalizing on many tired All-Star turns, Denver would rattle off three quick scores and took the lead 14-13. The All-Stars showed that they weren’t yet ready to hit the road again with a clean offensive possession to tie it up again at 14-14. A quick zone look from the All-Stars’ D line proved ineffective as Molly Brown secured another score and the game point advantage. Trying to extend the game, an unfortunate All-Stars’ miscommunication gave the disc back to Alicia White who ripped a gorgeous around backhand for the score and the 16-14 Molly Brown victory.

The two teams put on a great show for the full house in Denver as this one really came down to the wire. The hometown team was able to walk away victorious before setting their sights on the weekend’s Pro-Elite Challenge. While many of the All-Stars also competed in the tournament, the Tour gwas put on hold for a few days before they travel to Atlanta to face Ozone on August 3.