Nationals Probabilities: Every Team's Chances To Win A Title

This article was written by guest author Thomas Murray. Ultiworld’s coverage of the 2016 Club Championships is presented by Spin Ultimate; all opinions are those of the authors. Please support the brands that make Ultiworld possible and shop at Spin Ultimate!

The purpose of this article is to outline an alternative method for ranking ultimate teams, allocating National Championship bids to the regions, and predicting single-game and tournament outcomes. At the end of this article, I report predictive probabilities derived from this method for each team’s pool placement and tournament finish at the National Championships this week. I will keep technical details in this article to a minimum. ((If you contact me at 8tmurray at gmail dot com, I would be happy to send you a PDF with the bare bones technical details. I will soon be submitting a manuscript to a statistical journal with these details and an objective evaluation of various methods for ranking ultimate teams.))

Like the current algorithm, the proposed method does the following:

Unlike the current algorithm, there is never a need to ignore games between teams with hugely differing strengths. Recall, the current algorithm ignores blow-out games between teams with rating differentials of 600 or more, but only if the winning team has at least five other results that are not being ignored. Moreover, the proposed method facilitates the following: The proposed method is a hybrid model that I’ve developed specifically for ultimate, which alleviates the known flaws of win/loss and point-scoring models that were considered by Wally Kwong last year here on Ultiworld. ((The first hybrid model was proposed by Annis and Craig (2005) in the paper, “Hybrid Paired Comparison Analysis, with Applications to the Ranking of College Football Teams,” and later simplified by Annis (2007) in the paper, “Dimension Reduction for Hybrid Paired Comparison Models.” These papers discuss the flaws engendered by win/loss and point-scoring models, and I point of some of these flaws below.))

I think the current algorithm and bid allocation scheme are pretty darn good, and overall these tools/procedures have been beneficial for fostering a more competitive and exciting sport. Frankly, we are splitting hairs at this point with respect to ranking, and even bid allocation. The current algorithm doesn’t facilitate prediction, however. I am doing this because I enjoy this sort of thing, and minor improvements for ranking and bid allocation can still be worthwhile. The predictions are interesting in their own right.

I plan to maintain current rankings, and nationals predictions for all divisions in Club and College on my website.

Thank you Nate Paymer for making the USA Ultimate results data publicly available at www.ultimaterankings.net. This was an invaluable resource. 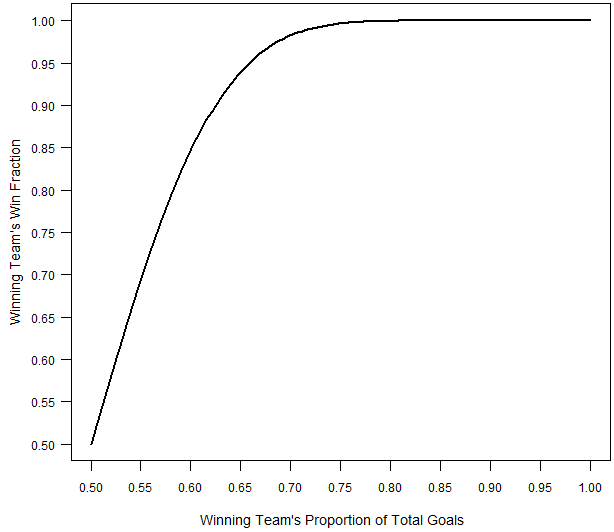 Note that there is a diminishing marginal return for larger margins of victory, just like the current algorithm, and in line with our subjective notions. ((I derived the win fraction through a working assumption about the point-scoring process. Namely, the win fraction reflects the % of games that a team would win against their opponent if their probability of scoring on each point is equal to p, and the game was played hard to 13. The observed win fraction in a particular game is calculated by plugging in for p the observed proportion of points that the team scored. This definition for the win fraction is a subjective choice, but I believe it is reasonable, and it results in a parsimonious and useful method.))

Using the win fractions, one can estimate a strength parameter for each team, just like a win/loss model. A point-scoring model also works similarly, but each team is attributed multiple “wins” each game equal to the number of points they scored. The major flaw of a point-scoring model is the marginal return for larger margins of victory is constant, rather than diminishing. The major flaw of a win/loss model is that it doesn’t use all the available information, and tends to perform poorly with small numbers of results like we deal with in ultimate. In particular, win/loss models vastly overrate undefeated teams that played an obviously weak schedule. The hybrid model alleviates both of these issues.

I also assign a weight to each match based on when it was played relative to the most recent week, and the winning score. I down-weight matches by 5% each week, and down-weight shortened matches in proportion to the amount of information they contain relative to a match played to 13. ((The above weights and win fractions for each match lead to an objective function, called the likelihood. I take a Bayesian approach, so I also specify the same weakly informative prior distribution for each team’s strength parameter. Doing so ensures the rankings are fair and dominated by the results from the season. Together the likelihood and prior results in a posterior distribution that tells me the likely values for the team strength parameters, and thus the likely rankings.))

The current rank-order allocation scheme could still be used based on the rankings. However, this new method naturally facilitates an alternative probabilistic bid allocation scheme. To do this, I calculate the probability that a particular team is in the top 16 (or top 20) using the posterior samples.

By summing these probabilities for all the teams in a particular region, I calculate expected number of top 16 teams in that region, which I call the bid score. To allocate the 8 (or 10) wildcard bids, I sequentially assign a bid to the region with the highest bid score, subtracting 1 from the corresponding region’s bid score each time a bid is awarded. In this way, the bids are allocated to reflect regional strength, accounting for uncertainty in the actual rankings.

Extrapolating, I can simulate the entire National Championships in each division. In particular, I can sample one set of strength parameters for the 16 teams competing at nationals, simulate the tournament given these values, and record each team’s finish. Iterating this process, I can calculate the posterior probability of each teams pool placement and finishing place, i.e., 1st, 2nd, semis, and quarters.

Below, I report the top 25 teams in each division at the end of the regular season, along with bid allocation under the two schemes. I then report the predictive probabilities of each team’s placement in their pool, and Nationals finish at this week’s tournament.

Awesome! Thanks for doing this. One suggestion is that you might want to use a different win fraction curve for bid allocation versus prediction. For bid allocation, the curve should be steeper (or have a discontinuity at .50/.50) to reward winning more than just losing close. For prediction, sure, every point is equal or nearly so. Also, perhaps pool play games at tournaments should be discounted just like shorter games or games earlier in the season. The real unit of measurement is still the tournament, not the game. Record comes into play only as a tiebreaker. “We won”, “we lost in semis”, but “we lost in quarters but went 4-0 in pool play”.

This is awesome. Thank you for doing this and good luck with your manuscript submission. I may have missed it on mobile, but did you describe what mean strength parameter is? I assume 90% crl is confidence interval?

Obviously jumped to my region without fully understanding the algorithms, but 1 bid for NC Mixed looks suspicious with the ranks of the top three teams being 3, 6, and 12.

You’re right, that table is completely wrong. I’m not sure what happened. Here are the correct allocations for Mixed:

I also found a bug in my bracket simulation function, so the bracket placement probabilities above are in error.

Sorry y’all. I was really rushing to get this out prior to the tournament.