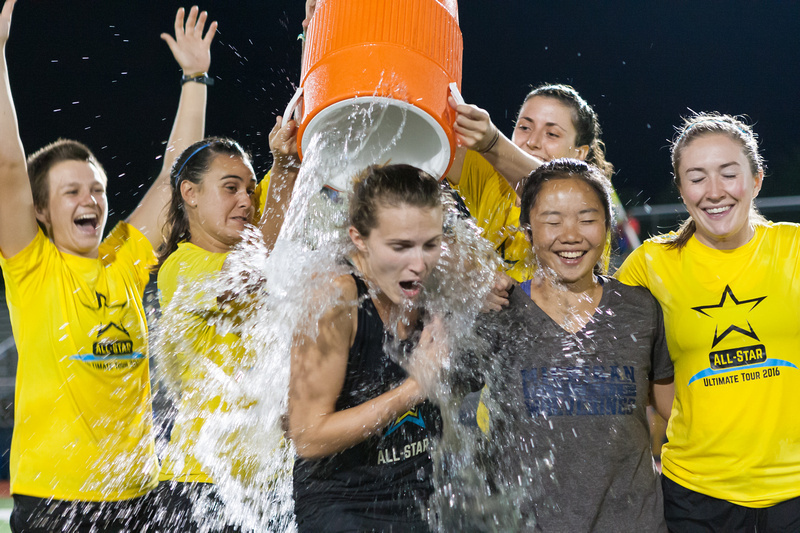 After a long and grueling tour that started back in Seattle nearly three weeks ago, the All-Star Ultimate Tour wrapped up in Boston with a bang as Boston Brute Squad prevailed 15-13 in one of the best games of the Tour. Just like in last year’s Tour finale, the rain held off just long enough for the hometown favorites to show off why they are the defending National Champions. Both the Tour and Boston displayed incredible patience with plenty of flair in the final All-Star game of the year.

The key to Boston’s success was the patient offense displayed from both lines. Brute’s handlers were calm with the disc and let their cutters churn for under after under; Laura Bitterman and Sydney Dobkin seemed perpetually open. Leila Tunnel embodied this composure, bringing her trademark poise to the O-line showing the patience to let her cutters get open and the skill to hit them when she needed to.

The Tour looked a little flustered coming into their final game together and it was clear a mix of emotions was running high as their offense was broken twice to start by Brute’s traditionally strong person-to-person defense. Claire Revere launched a huck that drifted out of the reach of a sprinting Jesse Shoftner before Boston took an open shot to Lauren Sadler. Brute looked patient and swung the disc repeatedly in their endzone set, but remained willing to take shots on open looks, as Amber Sinicrope hammered to Caitlin O’Connell for the opening score.

Boston would add another break before the All-Stars called a time out and settled down their O-line. Going slightly downwind, the Tour utilized a particularly deep horizontal stack which gave them wide lanes underneath that Revere chewed up. At the same time, it hurt their continuation and deep game as the Tour had a hard time connecting on hucks to receivers already starting their cuts so far away from the disc; Revere had two throwaways deep in the first three points alone, a trend that would continue throughout the night.

After a Brute turnover near their own goal line, the All-Stars burned their second timeout of the first three points to set up their endzone offense. Caitlin Fitzgerald and Sarah Edwards quarterbacked the offense, with Edwards hitting Shofner for the Tour’s first hold.

Throughout the course of the night, the Shofner-Bitterman matchup was one of the most exciting elements of the game. Both players showed off their incredible speed all night, fighting for every inch on in and out cuts. Over the past few years, Bitterman has finally started to get more of the recognition she deserves for her incredible cutting ability and nose for the endzone; even though she isn’t the flashiest name on Brute’s O-line, she is very much one of their most essential cogs. Shofner played a similar role for the All-Stars as their emotional leader and fiery cutter.

For the duration of the first half, both offense got into a rhythm and traded hold after hold with only a few turns. Brute showed championship-level confidence and patience for most of the field. The person-to-person defense from the Tour had a difficult time taking the disc away from the hosts, with most of Boston’s turns coming from unforced errors, in the redzone especially. That redzone inefficiency will likely be one of Brute’s biggest takeaways from this game heading into the Club Series.

Another essential Brute Squad cog whose star has been rising over the past couple seasons, defender Cassie Wong, was a force in this game ((Despite arriving late from work and jumping into the fray mid-game.)) as a ferocious defender. She also showed off her tremendous quickness on the turn, as Boston’s D-line offense usually looked to send her deep.

With the score at 7-5 in favor of the hometown favorites, Boston’s defense got the turn and looked upfield quickly, but a overthrown upline pass missed 2016 College Offensive POTY winner and Dartmouth star Angela Zhu, giving the disc back to the All-Stars. They would string together three successive upline cuts before Clare Frantz put a high-release backhand straight to Revere for the goal.

After that much needed hold, the All-Stars traded the person-to-person defense they had run all game for a junk look with three defenders in the lane and one over the top. This zone forced a turnover when Dobkin couldn’t reel in a loopy blade from Tunnell. Capitalizing quickly, the Tour brought the game within one right before halftime. Tunnell, leading her offense back to the sideline kept her hands high in a power position, a confidence booster she had utilized earlier in the spring as the coach of Amherst Regional High School to lead them to an undefeated season.

Boston elected to put their D-line on for the O point to close out the half and they marched the disc down the field as Zhu hit a wide open Wong to give Brute the 8-7 lead at the break.

By halftime the crowd had finished trickling in. The threat of rain earlier in the day had kept many away until after the start of the game but by the end there were around 300 slightly damp fans from across Massachusetts and New England.

Going into their final half as a team, the All-Stars refocused and played hard, not only to win, but also to celebrate their entire time together.

Coming out of the break, Boston showed patience with the disc and used several beautiful Tunnell around-backhand breaks to secure the hold to push their lead to two. It would be the first in a string of 11 straight holds by the offense in the second half, as both teams grew more and more comfortable with their opponent’s junk sets and person defense.

Despite the lack of breaks, the game was not without excitement. At 11-10, Leila Tunnell decided to dominate the rest of the game and give the crowd their money’s worth. After a miscommunication turn by the All-Stars, Becky Malinowski took off deep and Tunnell rushed to pick up the dead disc before unleashing a gorgeous laser backhand huck.

Two points later, it was more of the same as Tunnell beat an All-Star zone with one throw, a near mirror image backhand huck to Malinowski for another score.

After an All-Star hold, it was time for Bitterman to get in on the action, cleaning up the trash on yet another Tunnell bomb, before tackling teammate Elana Shwam, who had initially misread the floating disc.

Two helpful hints for any team facing off against Brute Squad: find someone who can keep up with Bit ((Unlikely.)) and don’t let Tunnell huck a backhand. ((Even less likely.))

On their final point of the Tour, Haley Wahlroos launched a huck for the endzone but Julianna Werffeli tipped the disc just enough to break up a goal. As they had throughout the entirety of the game, Boston’s offense went to work churning out yards underneath until Sinicrope launched a backhand deep to a well-guarded O’Connell. With Revere in good position, it looked like O’Connell had no chance at the disc but the former Slow White standout fought through the contact and skied the Whitman product for the break goal and the 15-12 win.

It was an exciting way to end the final game of the 2016 All-Star Tour.

For Boston, it was an honor to host the Tour’s finale for a second year in a row and was an excellent opportunity for the rest of the Boston ultimate community to come together and root for Brute.

For the All Stars, it was an emotional end to their journey and, even though they ended the tour with a disappointing 3-7 record, their goal of increasing the visibility of women in ultimate and producing high-quality video and highlights was incredibly successful for yet another year.