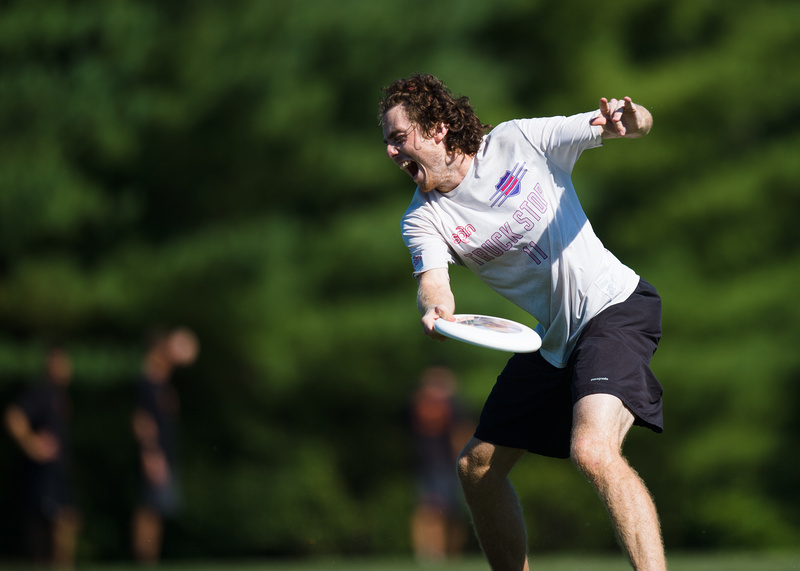 In the high winds of the morning, Kansas City showed depth at the handler position that most believed they wouldn’t have. Abe Coffin is already known, but Jones Clemons was a standout offensive force for them. After a John Stubbs huck to give Ironside a 5-4 lead, Clemons responded with an upwind half field flick to Matt Jackson. Prairie Fire easily earned their break back going downwind, and they took back the lead 6-5.

They would hold that lead until the game was tied at 11’s. An inadvisable Ironside huck was tipped, and then it fell into the hands of Christian Foster. This rare chance looked wasted on a turn, until it was called back for a controversial foul on the mark. Ironside broke to take a 12-11 lead.

In an attempt to get their break back, Prairie Fire stepped up the defensive pressure. Josh Markette couldn’t field the bladey huck, as it bounced off of him and rolled out the back of the end zone. Prairie Fire’s defense clamped down, with the Ironside O spending a full minute inside their own end zone. Growing impatient, Kurt Gibson hucked it downfield. In a version of punt and play D, they quickly got it back with pressure man defense. Boston would hold out for the win, 14-12.

One thing to note: Ironside tried a cup defense several times against Kansas City, to no avail. Prairie Fire was not at all phased and easily broke through it.

“Our defensive mentality in terms of what we were trying to take away, we weren’t all on the same page,” Boston coach Josh Mccarthy said after the game. “We let them run with their O-line for too many points.”

He then went on to warn teams about the strength of Prairie Fire.

“Prairie Fire is a great team. They showed up today and played very very well,” Mccarthy said. “Their O-line was phenomenal.” High praise from one of the division’s best.

Unlike their Pool A counterparts, the points between PoNY and Ring of Fire were extremely long and turnover heavy. A combination of Ring’s punt and play D strategy and Pony’s grind-it-out offense made for some marathon points that became important moments in the game.

Ring took an early 4-2 lead, when Tim McAllister ran the entire length of the field to sky for a downwind huck. A difficult catch went to waste when PoNY quickly closed the gap and took half 8-7.

The style of PoNY proved to be superior, with Raleigh seemingly running out of offensive assets to use. Ring of Fire is definitely utilizing familiar names at the handler spots, like Noah Saul, Jon Nethercutt, and Matt Gouchoe-Hanas. At just 20 years old, Gouchoe-Hanas showed a huge amount of poise in the windy conditions.

PoNY showed flashes of great depth, but they were led by familiar faces. Michael Drost registered three goals and one assists, while his brother Ryan scored two assists of his own. Despite the close box score, PoNY controlled the second half. The high-wind conditions made it extremely difficult for Ring of Fire to gain an advantage.

Washington DC Truck Stop 14-12 Michigan High Five With the game capped at 14, Michigan High Five (overall #10, seeded C3) broke upwind to tie the score at 12s, putting plenty of pressure on Truck Stop’s offense to respond. High Five would miss their chance to complete the break and with a little luck on two floaty throws, Truck Stop (overall #3, seeded C1) would get the clutch hold before going on to punching in the downwinder for the win.

“I think we just did a really good job of maintaining space going up wind,” said Truck Stop captain David Cranston after the win. “Their strategy was more to huck up wind and I think we did a better job at working some of those unders.”

Both teams played man defense nearly the entire game but approached upwind offense a little differently at the start.

Truck Stop’s willingness to work the disc up wind opened up deep looks while giving High Five defenders more threats to worry about. Early in the game (and to no one’s surprise) feared hucker Johnny Bansfield took most of the deep shots for Michigan and had some success pushing the D-line up wind. Like Truck, High Five eventually settled in and began to work the disc short. Their final break came from motion, as Phil Cherosky cut up line and took a quick OI shot to Connor Haley.

In wind conditions like this – which we’ll likely see the rest of the tournament – adaptability will me much more important than seeding.

“It really comes down to who completes that wonky upwinder,” High Five coach Tyler Kinley said after the game. “We had chances.”

Madison Club 15-10 Boston Dig
This is the ideal result first result for Madison (overall #6, seeded C2); a win that’s not a blow out and the chance to get the legs moving to ditch any Nationals jitters. Club cruised out to an 8-4 lead over Dig (overall #15, seeded C4) at half and never really looked back.

This game was strategically the complete opposite of the other Pool C contest, as both of these teams were more than happy to show off their zone looks.
Dig’s offense is interesting because they will crumble into a four man cup if they turn it over deep in enemy territory – with Jeff Babbitt lurking in the backfield. Boston’s ability to play in the wind should keep them competitive through the weekend.

With the blustery conditions making things an upwind/downwind affair, the game turned on a few key upwind breaks. The first one came with Bravo leading on serve 3-2, when Jimmy Mickle rifled a flick straight into the face of the wind to Stanley Peterson just outside the endzone. The Callahan winner then rumbled downfield to score the goal himself, skying a pile on a floaty disc and securing the game’s first break and a 4-2 lead for Denver.

H.I.P. got an upwind break of their own later in the first half when Mitchell Bennett ripped a backhand upwind for the score to close Denver’s lead to 5-4. Bennett, a lefty, was one of H.I.P.’s greatest assets in the game, as he was able to send supercharged backhands screaming into the wind against flick-side forces.

Unfortunately for Houston, they were unable to capitalize on the opportunity to break downwind that Bennett has given them. Seeing zone for the first time, Bravo worked the disc upwind for a clean hold, highlighted by laser hammer over the defense from Mickle to Stanley Peterson. The hold and a subsequent downwind break gave Bravo a cushion they would take into half, and they lead 8-5 at the intermission.

H.I.P. hung tough for much of the second half, keeping pace with Bravo’s offense. Much of that can be attributed to a dazzling second half from Matt Bennett, who either assisted or scored the first four goals out of half for H.I.P. Bennett had a somewhat quite first half as he struggled a bit to adapt to the strong winds, but once he found his footing in the second half he was a force to be reckoned with and ended the game with three goals and three assists.

Denver’s inability to put Houston away almost cost them, as a late game 4-1 run from H.I.P. tied the score at 13-13. Part of that followed an injury scare for Mickle, as he banged his head attempting to scoop a low swing. The knock forced him to miss a few points, but he returned to action as the game tightened up, and appears to be fit to play the rest of the day.

At 13-13, Bravo held downwind and broke upwind for game after Mickle picked off an inside flick in the endzone and moments late Tom Tulett bombed a lefty backhand to Henry Konker in the back of the upwind endzone. Tulett, a member of the Australian national team, was integral for Denver’s D-line and unafraid of the windy conditions. He could be a key figure for the team moving forward this weekend.

For H.I.P., their lack of polish showed as they had several unforced errors and execution mistakes near the endzone that could have turned the game around. The good news is that they’ll have another shot at an upset as they take on Machine in round two.

Machine started off the game hot and jumped all over Furious to the tune of a 3-0 lead. The conditions weren’t a problem for the team from the windy city, and they were confidently able to move the disc up and down the field. Brett Matzuka had no compunction about zipping 40 yard hammers into the stiff breeze, and early on it looked like the game might get out of hand.

But Furious got their feet underneath them and started to put some points on the board. Veteran Kevin Underhill was getting a lot of touches, and scored Furious’s first goal. He would end the day with a goal and three assists, but that doesn’t totally account for the impact he had on the team’s offense as he was their most confident player with the disc.

Furious got their chance late in the first half when a Malcom Bryson goal notched an upwind break for Vancouver and trimmed the deficit to a single goal. With the score 6-5 and facing an upwind point, Machine’s offense calmly worked the disc up the field, and Goose Helton found Jesse Buchsbaum with a break backhand to stop Furious’s momentum.

Chicago broke on the ensuing point, with Matzuka slicing an O/I flick to Michael Schwenk to take half 8-5.

The second half was much of the same, with Furious getting a lone break but Machine’s offense was able to immediately stop the bleeding, and after the Chicago D tacked on a few breaks of their own, take the game 15-10.