Showdown Of The Year: Wysocki Vs. Sexton At The Majestic 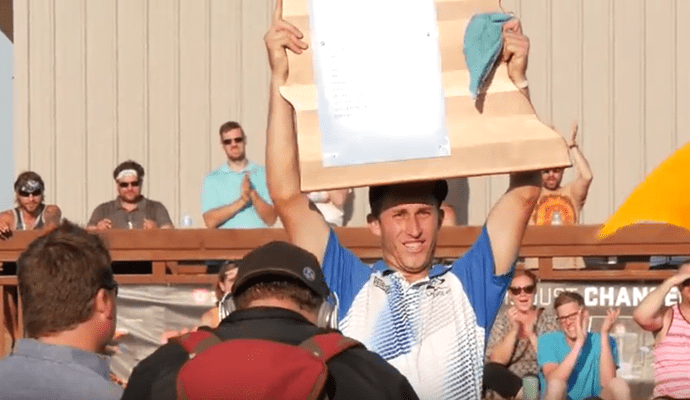 It’s awards season here at Ultiworld Disc Golf! Follow along the next few days as we hand out the virtual hardware for the top moments, performances, and players of the 2016 professional disc golf season.

While 2016 saw plenty of runaway victories, we were still treated to a plethora of tight contests that resulted in two players duking it out down the stretch. With that in mind, the Ultiworld Disc Golf staff put its collective head together to choose the Showdown of the Year, and – just like the award itself – the results were close.

In the end, our staff settled on Ricky Wysocki and Nate Sexton’s six-hole playoff battle to settle The Majestic as the winner. And a battle it was.

Sexton controlled the event up until late in the final day, when Wysocki took a lead on the 14th of 22 holes. When the two ended up tied after regulation, they bounced back and forth between Holes 1 and 22 at Minnesota’s beloved Blue Ribbon Pines, trading forehand park jobs during the first three extra frames before Sexton had a golden opportunity to salt away the win after Wysocki tossed his drive O.B. on the fourth hole.

Sexton, though, missed a 15-foot birdie putt low off the cage, and the playoff continued.

Again, the pair traded birdies on the fifth hole of the playoff, then both sailed their drives O.B. as they drove on the island hole 22 for a third time. Sexton was left about 25 feet from the pin, while Wysocki was about 70 feet out.

And that’s when Wysocki dropped a signature “Sockibomb,” canning the 70-foot par save with authority.

Sexton, aiming to extend the playoff, missed off the right side of the chains, and Wysocki was handed a Minnesota-shaped trophy and his fourth consecutive victory heading into the World Championships.

Wysocki, looking back at the victory last week, said staying calm was the biggest factor in taking home the win.

“I don’t care who you are, you’re gonna have nerves,” Wysocki said. “And so I just feel like the way I handled them was the reason I won. Obviously me and Nate are both highly-skilled players, and so the next thing that’s gonna determine the winner at that point is that you’re gonna have to handle your nerves better than the opponent.”

Sexton, to his credit, said he doesn’t reflect on the event with despair. Instead, he actually thought it was enjoyable.

“It was super nerve-racking in the moment, so it wasn’t that fun at the time,” Sexton said. “But when I look back at that event, I think I feel it was fun more than I feel I failed so hard missing that shot. It just reinforces what I already know, that a headwind putt is not my favorite shot and I need to work on that.”

Plus, he was able to look at the event and, with veteran savvy, appreciate the rest of his performance aside from the one big miss.

“It was too bad to not come through when I had what appeared to be such an easy chance to win a big tournament,” Sexton said. “But more than anything – you know, clearly I didn’t make the putt, so I had to go on and I still had more chances to win in that playoff after that and I didn’t come through on those. But it just kinda made me realize – I came away from it feeling like, ‘OK, great. I beat everyone else, I almost won this, I can definitely do that again.’”

The Majestic tilt wasn’t the only Wysocki showdown in the running for our awards: His Masters Cup victory over Paul McBeth came in second place in our staff voting. In both cases, Wysocki weathered difficult moments and emerged victorious, and he said pushing through those struggles was indicative of his play on the whole during 2016.