The Iceberg Challenge, Featuring Both Ice and Bergs

When it first showed up in my email, it seemed like such an obvious idea: a one-disc tournament featuring the fan-favorite Kastaplast Berg. The concept was fun, the caddy book was charming, and I had always wanted to try out the Berg. It seemed like Kastaplast had put together an event to match the Trilogy Challenge or Discraft’s Ace Race.

But it wasn’t organized by Kastaplast or a major retailer. It was created by Keegan Allanson and Nick Panozzo, two local Bloomington players who decided to put on the event they always wanted to play – a one-disc tournament that matched the conditions in the dead of the Indiana winter with the aerodynamic challenges of the Berg. 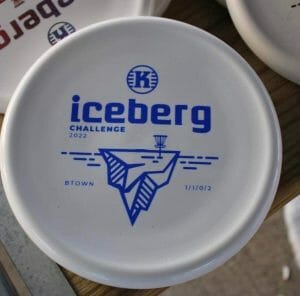 The Kastaplast Berg (1,1,0,2) is an unusual disc. It is high-shoulder rounded putter designed with a thumb track and a distinct puddle top. It has a strange hand feel and a very short, dumping flight. It is slightly overstable and, at a 1 speed, very slow. Its lack of glide makes it hard to throw very far but makes it great for backhand and forehand approach shots that fall out of the sky and land soft. The Berg is the kind of disc that generates strong reactions. Although many players hate its weird flight and feel, it has also built a small army of devoted fans.

Panozzo says the idea began to form in summer 2021. “I owned a Berg or two, but I didn’t bag it at the time,” he said. “Everyone that did play with the Berg loved it and swore by it. Also, the darn thing was hard to find. I remember going to Skybreed Discs, when it was still more of a walk-in shop, and the guys working there would tell me the Berg would sell out in the first 10 minutes every time they had a drop.” It was popular but unusual, the perfect disc to build an event around.

To get a large number of hard-to-find Bergs while the supply chain was still struggling with the pandemic disc shortage was a challenge. Panozzo contacted Discs Unlimited, a US distributor for Kastaplast. They were initially wary about promising 56 blank discs but agreed to move forward. “They offered a discounted rate to some guy who wrote a random email,” Panozzo laughed, “so I’ll take that as a win.” Discs Unlimited couldn’t make any promises about which colors or plastics would be available, but the event was a go.

The design of the discs, caddy book, and course signs were done by Allanson. “With a name like ‘Iceberg Challenge’ we had to bring some fun. I’ve been a professional graphic designer by trade for the last 15 years, and when Nick and I set our hearts on this idea, I knew I had to put something together,” said Allanson. “I set out to design a simple stamp that could have popped right out of the Kastaplast factory.” 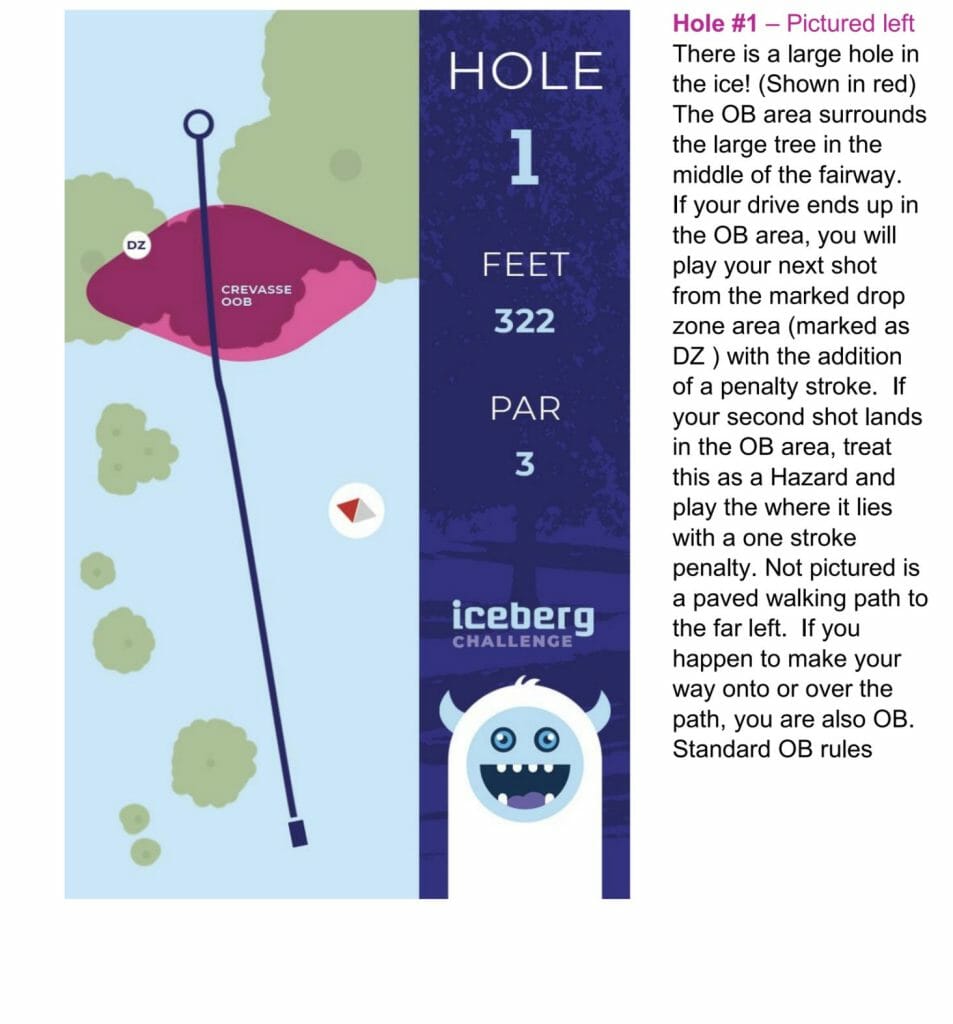 953×1024
“The marketing materials were all coming up a little plain until we threw in the Yeti,” Allanson explained. “After a little web searching, it was clear that I just needed to render my own version of the great white beast, so I came up with a fun little cartoon that we could use for the materials. Maybe next year that guy could make the disc.”

One advantage of building a course around the short flight of the Berg is that you can fit multiple holes inside of an existing course. For the Iceberg Challenge, Panozzo and Allanson wanted the course to be hard, with tricky landing zones, lots of obstacles, and plenty of OB. The goal was to force the player to throw every shot and precisely control the angle and ground play of the disc. All the holes were designed on the arctic theme, with players throwing around OB crevasses and finding safety on floating islands of inbounds “ice.”

“The main goal was to have fun but be hard,” said Panozzo. “When you finished, we wanted the player to feel accomplished.” 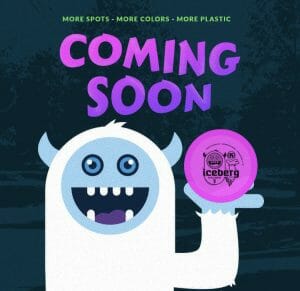 The plan was just to draw out these landing zones with white paint. And then winter intervened. The day before the tournament, Indiana received a covering of actual ice and snow. “I had bought 15 cans of white paint but the white paint idea was out the window,” Panozzo said. Instead, they had to head out into the snow to draw the entire course with suspended twine and flags. Panozzo headed out the night before the tournament with a group of volunteers and “was laying out the design of the islands with my footprints in the snow.” The Iceberg Challenge lived up to its name.

Despite the conditions, the event was a success. Neither Allanson nor Panozzo had ever run an event before and needed help to design the course, get everything in entered onto UDisc, and prepare the raffles and long-drive contest. Then they braced themselves in case no one showed up. “Leading up to the event, before registration went live, I told myself that if eight people sign up to play, then the event will have eight people that year,” Panozzo said. “If eight people showed up, survived, and had fun, that was enough for me. It might be our own little Barkley Marathon.” In the end, 52 people braved the snow to play in the first Iceberg Challenge.

The excitement around the Iceberg Challenge gave Panozzo and Allanson the motivation to run more events. They are also considering branching out. For example, Panozzo says they are considering “a Hogroast event with the Innova Pig with a big BBQ as a backer.” Whatever events may follow once the Indiana winter lifts, the 2023 version of the Iceberg Challenge is already planned for next month.