Top Of The World View: Appreciating The Volunteers And Following The Lead Women 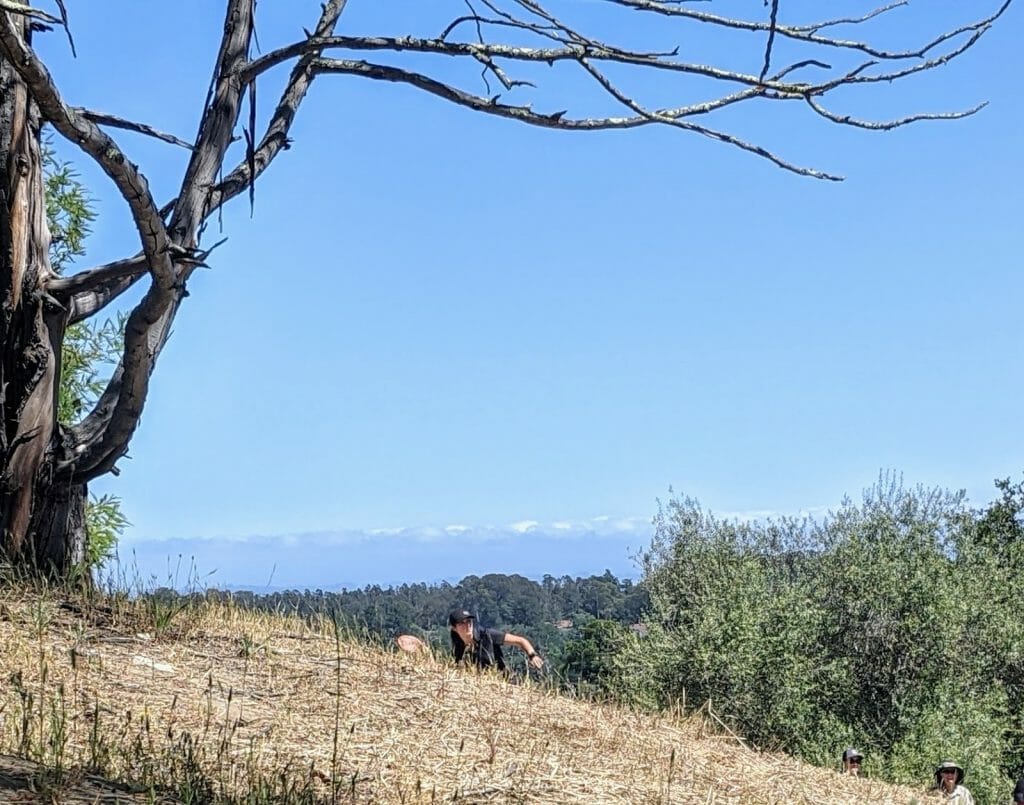 Good morning. As in, Sunday morning. Day two of the Santa Cruz Masters Cup is in the books and I have plenty of stuff to write about after wandering the course, following the women’s lead card for a long spell, and chatting with spectators, volunteers, Disc Golf Hall of Fame members and should-be member* and other old friends.

I also have a take on a bit of background drama going on this weekend. You might not think it’s a particularly bold take, but, whatever. “You do you,” as my two woke daughters like to say. 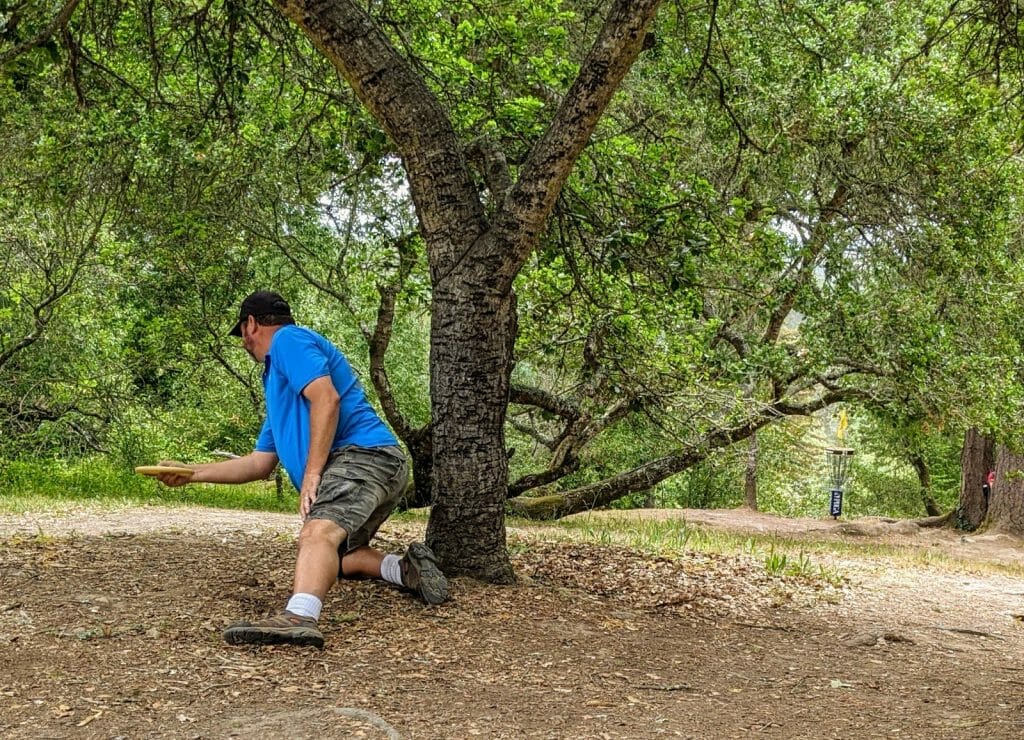 I did watch plenty of great golf Saturday, like this upshot on event hole 21 (DeLa hole 18). So you can properly appreciate the execution required here: In addition to the low branches directly in front of this guy, he has to take care of steep drop-offs all behind the basket, and a giant exposed root called “The Anaconda” crossing 20 feet in front of the basket. Photo: Jack Trageser

First, though, I would like to give you an inside look at the way the whole spectator thing has worked at the Masters Cup. Up until only a month or so ago the Delaveaga Disc Golf Club didn’t know if the county would allow spectators at all, or on what level. The final arrangement was a system of paid admission tickets that enabled patrons to either watch from one of three “pods” located around the course, or follow a particular lead card. I spent some time with both, and also talked with the volunteers tasked with maintaining order.

Given the fact that the PDGA and the club were giving a set of constraints in terms of how many spectators would be allowed into the event, I’d say things have run smoothly so far. The paying spectators I spoke with, most of whom seem to be very new to the sport, by the way — take note disc golf marketers — were enjoying themselves. They felt their tickets to be well worth the $35 to $75 they paid. 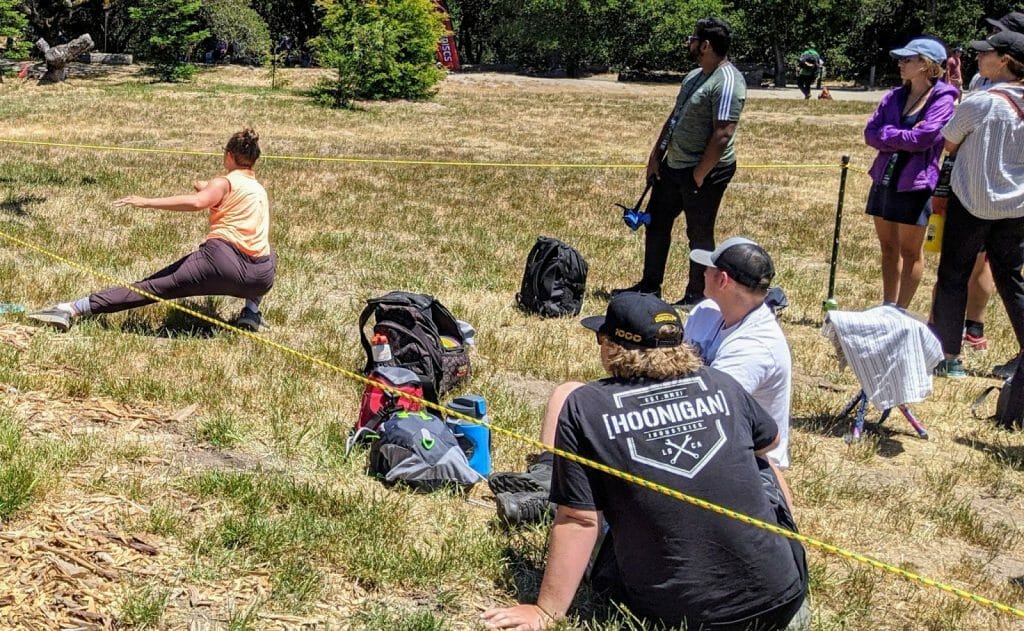 Didn’t get this player’s name, but she is throwing an upshot on event hole 4 from within a spectator pod (look for both lines of yellow rope). Photo: Jack Trageser

As I stood chatting with the Pod People of Pod no. 1, whose vantage point provides views of at least five different holes including “Top of the World,” a drive approached at speed from that very same famous tee pad. The Pod People all scuttled to the far end of their pen1 as the disc thunked into the dirt where we had been standing. With my big bad media badge I was on the other side of the rope; outside the pen, if you will. So I didn’t have to scuttle.

When the player came to play her shot the Pod People remained at the far end of Pod no. 1. Sorry, I didn’t get the player’s name. But she threw a fairly decent upshot and nailed her putt for par.

My interesting volunteer spotlight falls on three people who drove all the way from Fresno to help out with the tournament. They also feel like they got a great deal. They get to spend the day watching top-level disc golf up close, in 70 degree weather rather than the 90+ they left back home. But they definitely had to work for their suppers, so to speak. 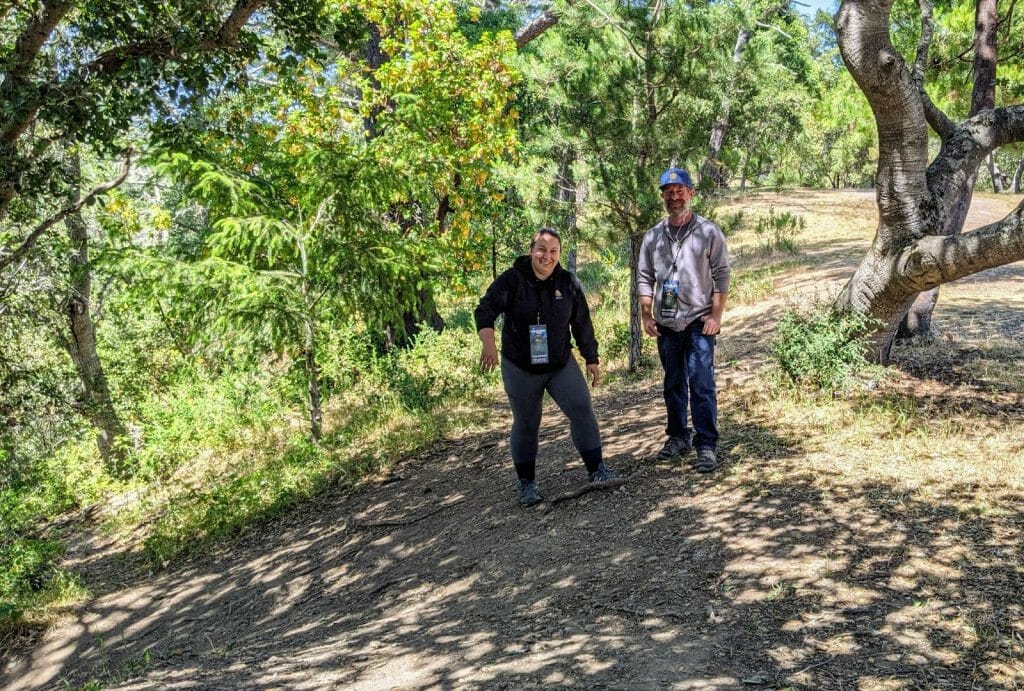 Two of them were tasked with spotting on event hole number 3. This hole plays along the spine of a ridge that leads out to the tee pad for “Top of the World.” The fairway is narrow, and the terrain drops off sharply on both sides. Craig and Maya had to scurry up and down these slopes to spot discs all day. But that’s not all. They also had to enforce the park’s closure for all but disc golf, which meant telling walkers and bikers intent on finishing the climb and gazing out from “Top of the World” at the ocean that it wasn’t gonna happen.

Let me tell you, Maya and Craig are tough cookies! Matt Beatty,2 send them a gift basket! I didn’t come across any volunteers doing a better job enforcing rules. I did hear a little about non-paying spectators slipping onto the course, but the grumbling came from a volunteer rather than a paying spectator. 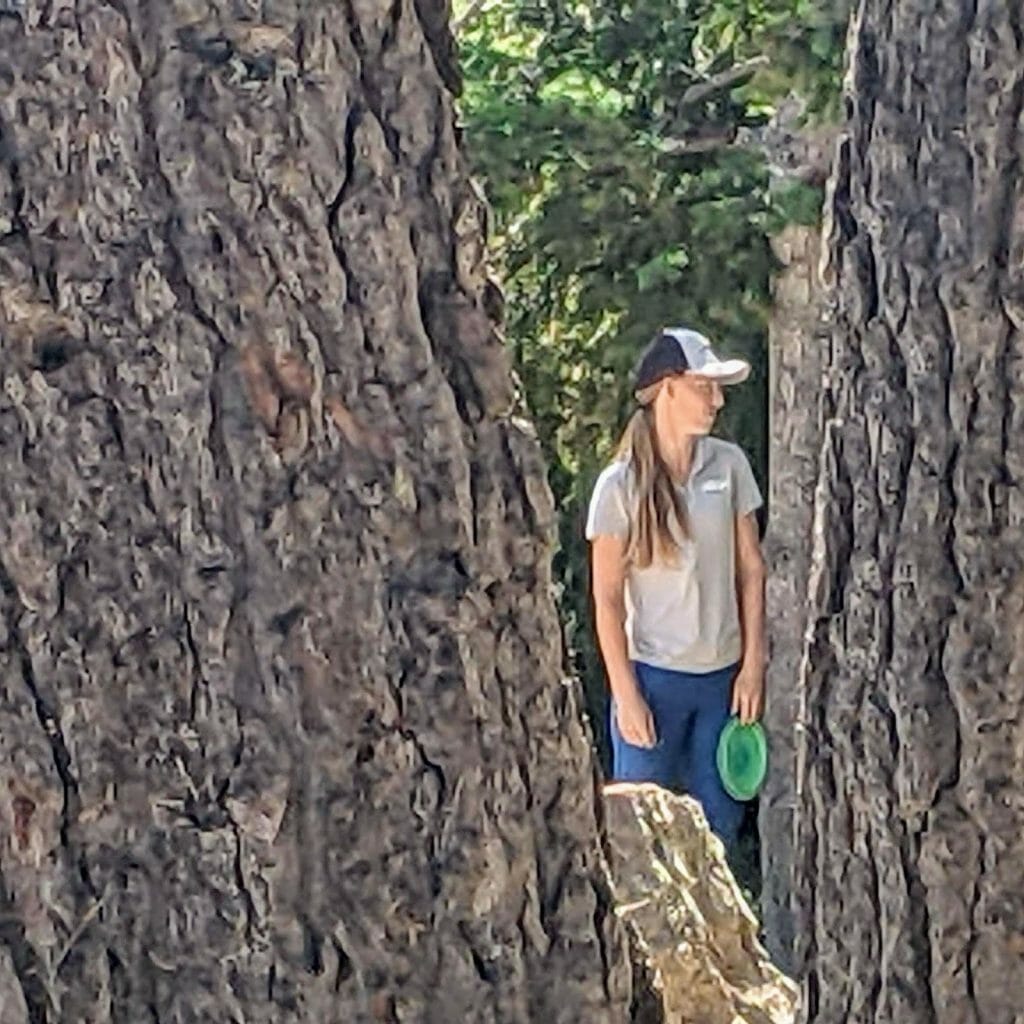 Paige Pierce, waiting through one of many backups on event hole 6. Photo: Jack Trageser

All in all I think the spectator side of things has gone well so far, and all of the ticket revenue has been added to the purse. So, yeah. Good. It’ll be interesting to see if this is the new norm, after Covid.

I mentioned in my previous entry to this series that I was looking forward to following the women’s lead card on Saturday. Well, I did, and they did not disappoint. And not just them, but the several cards ahead of them of which I caught glimpses. I love watching players who are world class in their execution but play lines I myself would play — because I can’t throw 600 feet.

With men’s lead cards I’ll get to see the seemingly superhuman shots, and that’s cool, too.The men also provide more stupid mistakes through hubris, which is good entertainment. But I just find it so much more engaging watching someone play the same shots I’d play, and executing at a very high level. And on this particular day, the foursome had it all! Paige Pierce and Catrina Allen, who I like to think of as arch rivals even if they don’t think of it that way themselves, the young phenom in Hailey King, and Juliana Korver, the legendary world champion and cagey veteran.

My point with all this is that if you aren’t watching the women with as much interest and investment as the men, you ought to consider my reasoning and give ‘em a try. 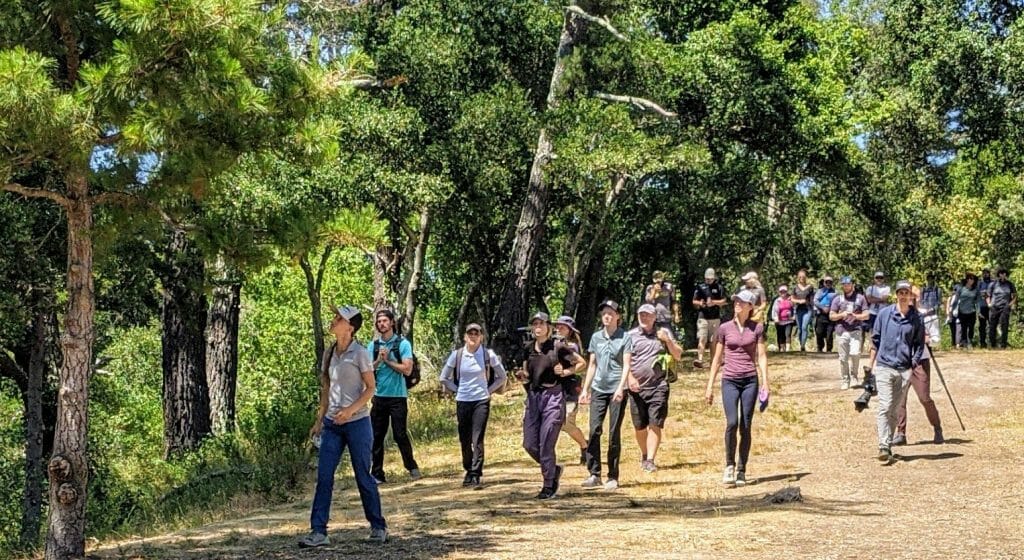 The 2-meter rule rears its head again, this time costing Paige Pierce a stroke on event hole 11. What the Frick! Photo: Jack Trageser.

Speaking with a PDGA person who is also a friend,3 I learned of some salvos being tossed back and forth on social media about the number of camera teams covering female lead cards vs. male lead cards. One player demanded the PDGA insist on equal coverage in this regard. Once you learn the facts you understand that that is not realistic. But until the coverage is equal, we’re all missing out. We just need to address the issue by increasing demand, not by manipulating supply. 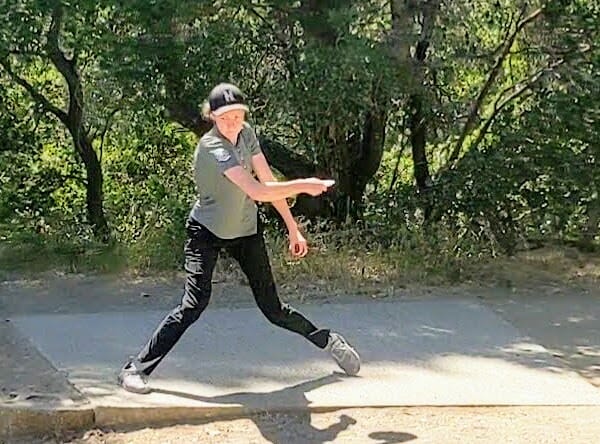 One more thing I love about the pro women, since I can’t seem to let it go quite yet: They make great form models that I frequently use as a disc golf coach. Some of our best players are small, like 5’ or 5’ 4” tall — and they can still crush drives 400 feet. To do this they must get every ounce of bodily leverage they can while maintaining proper timing and balance. Watch Catrina Allen do this time after time. It’s truly something to see.

Well, I need to head out there and see how this thing winds up. Paige Pierce has to stay ahead of Kona Panis, and on the MPO side the lead card should be full of dramatics.4 Don’t rule out Ricky Wysocki and Paul Mcbeth, eight strokes out. Just sayin’.

Before I sign off, here is a picture of another of DeLaveaga’s Hall of Famers, Marty Hapner, along with a guy whose induction is overdue in my opinion. Stevie Rico is part of the history of the sport, has (I think) the longest streak of years (20?!) winning at least one A-tier event, and is a hardworking SOB. 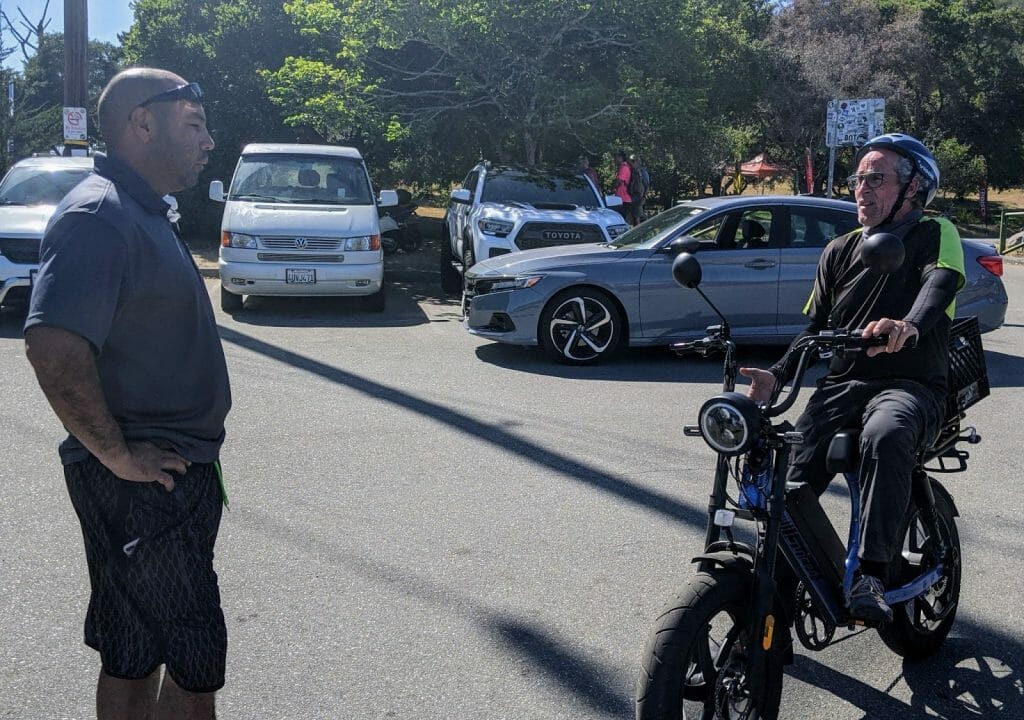 Steve Rico, left, and Marty Hapner, join me in a discussion about respect. Photo: Jack Trageser