Ultiworld's Catch Of The Year Bracket, Presented By Friction Gloves 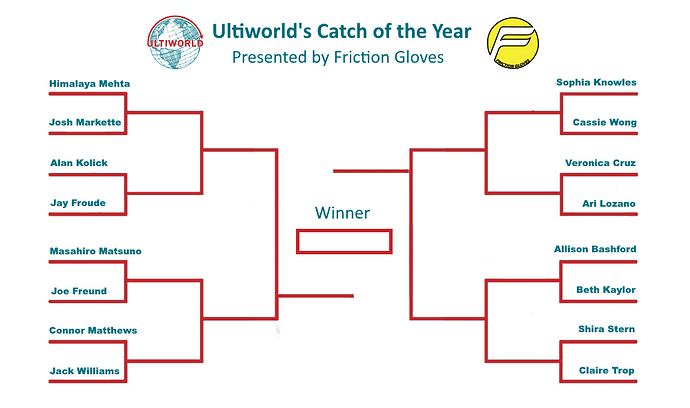 2016 produced so many amazing catches, from layouts to skies to “how did that just happen?!” snags. They happened both in big moments and when few were watching, across every division and every competition. With more and more ultimate getting immortalized on film, we now have a mountain of incredible options to sift through as we debate which catches were the best of the year.

Here’s where you come in. After painstakingly narrowing this down to a Top 16, we bring you a bracket of options to vote on. Over the next week, we’ll let Ultiworld readers decide which was the best catch of them all. Watch and vote below, then check back to see which clips advance for another opportunity to choose.

Himalaya Mehta - Philadelphia Spinners (MLU)
The most popular post on Ultiworld in 2016, this catch was less about the final grab and more about the entire play that led to its amazing conclusion. A misfired swing pass turned greatest that is tipped multiple times before a bidding Mehta enters the play out of nowhere to secure a goal.

Josh “Cricket” Markette - Boston Ironside (USAU Men’s Club)
Amidts all the massive layouts and impressive skies, this grab from the Club Men’s national final may have been the most superhuman catch we saw all year. After the dump pass was tipped, Cricket’s instantaneous, miraculous reaction scooped up the disc before it hit the turf to keep the critical Ironside possession alive.

Alan Kolick - DC Breeze (AUDL)
Alan Kolick seemingly rides on an imaginary broomstick to stay suspended in the air long enough to bring down this goal, absorbing major body contact as he does so.

Jay Froude - Kansas City Prairie Fire (USAU Men’s Club)
This layout catch from Froude in a Regional game-to-go is wildly impressive, even on replay. But watch closely and you’ll notice that this is in fact two separate layouts, near mirror images of each other, that happen back-to-back, bookending a travel call. Wow.

Masahiro Matsuno - Japan (WUGC Men’s)
One of the best players of his generation, Japan’s Masahiro Matsuno showed he still has plenty of athleticism as he skies John Stubbs – a flag-bearer for the next generation of ultimate – in the WUGC Men’s Final.

Connor Matthews - Oregon Ego (USAU Men’s D1 College)
Without the brilliant effort of Matthews, this one goes down a textbook example of why not to attempt a same third huck. Instead, Matthews saves his thrower by acrobatically toeing the back corner of the endzone.

Jack Williams - UNCW Seamen (USAU Men’s D1 College)
While UNCW struggled in Raleigh, Jack Williams did his part in their pool play game against Wisconsin, making a number of highlight plays including this monster layout to keep the Seamen’s comeback attempt alive.

Sophia Knowles - Columbus Rival (USAU Women’s Club)
After a tight game in brutal wind, Rival and Showdown were locked in double-game point in the last round of pool play at Nationals. Attacking the downwind endzone, Sara Scott put up a huck that looked like it would carry a bit too far before Sophia Knowles launched herself for a chest-high, game-winning layout grab.

Cassie Wong - Boston Brute Squad (USAU Women’s Club)
Close watchers of Brute Squad will point out that this catch isn’t all that out of the ordinary for Cassie Wong. While the rest of us gaped at the supreme athleticism – the blazing speed, the massive layout, the picture-perfect form – on display in this US Open final catch, her stoic expression upon getting up confirms that she thought it was downright routine. That’s jut not fair.

Matchup 6: Battle of the College Finalists

Veronica Cruz - Stanford Superfly (USAU Women’s College)
When you’re trying to knock off the top-seeded prohibitive favorite at Nationals, you know you’re going to need to make some big plays. That’s just what Cruz does here, attacking a pass that was slightly behind her to close off a bidding Olivia Bartruff, absorb the contact, and hold on for the epic semifinal upset.

Ari Lozano - Whitman Sweets (USAU Women’s College)
The next day, Ari Lozano was making big plays for Whitman against Cruz’s Superfly, like this grab that needed every ounce of her speed and balance to run down and keep in-bounds.

Allison Bashford - Asheville Cahoots (USAU Club Mixed)
When this throw goes up, it seems there’s no way Bashford can catch up to it – it’s so far out in front of her and is moving way too fast. But with a full-extension layout she snags it, the disc seemingly magnetized to her outstretched hand.

Bethany Kaylor - All Stars (All Star Ultimate Tour Showcase)
A smooth forehand from Jesse Shofner. Nobody there to receive it. Until, BOOM, Bethany Kaylor explodes into the frame --and into SportsCenter’s Top 10 – for a monstrous grab and one of many memorable moments from this summer’s All-Star Ultimate Tour.

Shira Stern - Seattle Riot (USAU Women’s Club)
Long-time Seattle player and product of the flourishing youth scene, Shira Stern delivered one of the signature highlights in a signature game at Club Nationals. Stern’s back-of-the-endzone layout grab was one of a few key plays that propelled Riot past their long-time nemesis Fury in the semifinals, a game that will no doubt live on as one of the rivalry’s classic encounters.

Claire Trop - USA (WJUC Girls)
One of the most dominant high school players in the country right now, Claire Trop served up a huge scoring layout for Team USA in the finals of the World Junior Ultimate Championships this past summer. She is a senior at Lakeside HS, the #1 team in the country.