When Will Paige Pierce Break 1000? A Re-Evaluation 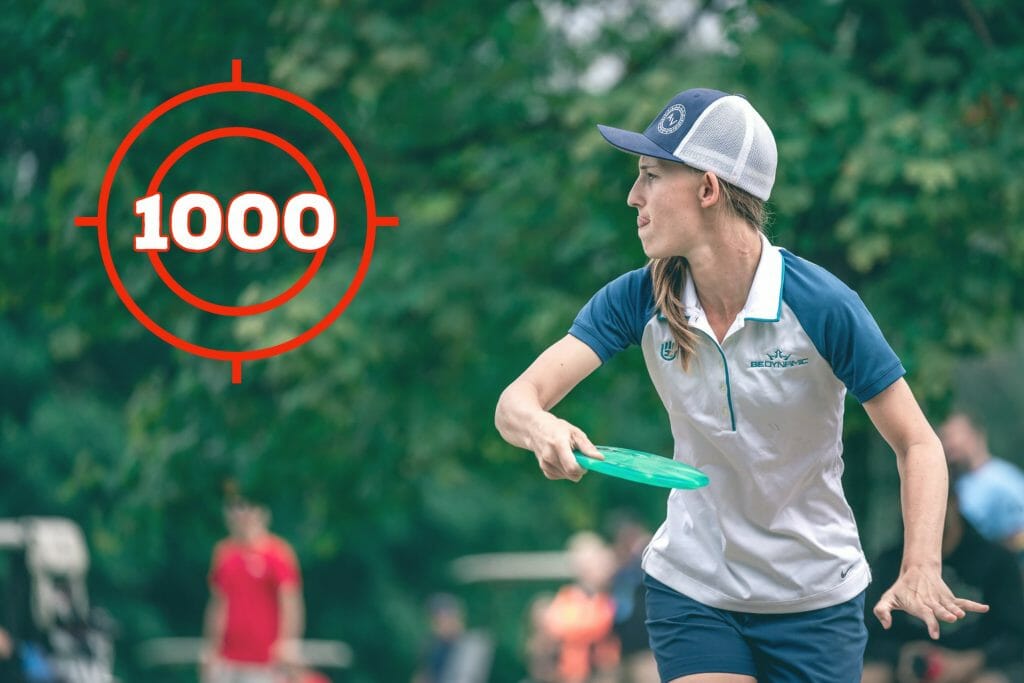 With the end of offseason 2.0, Paige Pierce has resumed her dominance over the FPO division, and her new record high player rating of 988 not only confirms she is the best current female disc golfer but that she is also firmly in consideration for best of all-time. However, this article isn’t about proving she is the best ever. That will long be a debate. What I want to investigate, and what we can potentially quantify, is how good she can get?

This argument typically starts and ends within the context of Pierce reaching a player rating of 1000. While not having much actual value other than fitting nicely within our base 10 numbering system, the 1000 rating does provide a framework for the speculation that goes hand-in-hand with this type of discussion.

Some of you will note that I have addressed this question before. Back in 2018, when Pierce was on another one of her heaters, I predicted she could reach a 1000 rating by August of 2022. To briefly review, I got this prediction by fitting what is called a logarithmic curve to her player rating over time and projected it into the future.

How has Pierce done compared to that model? Surprisingly, not well! Even with her new record player rating, she is still behind the projected rating she would need to be on pace for reaching 1000-rated by 2022. I am certainly surprised, but the pattern in the plot below clearly shows her rating falling behind my original projection.

If I update this model using the most recent data (in red), it predicts she should not reach 1000 until June of 2024, almost four years from now. 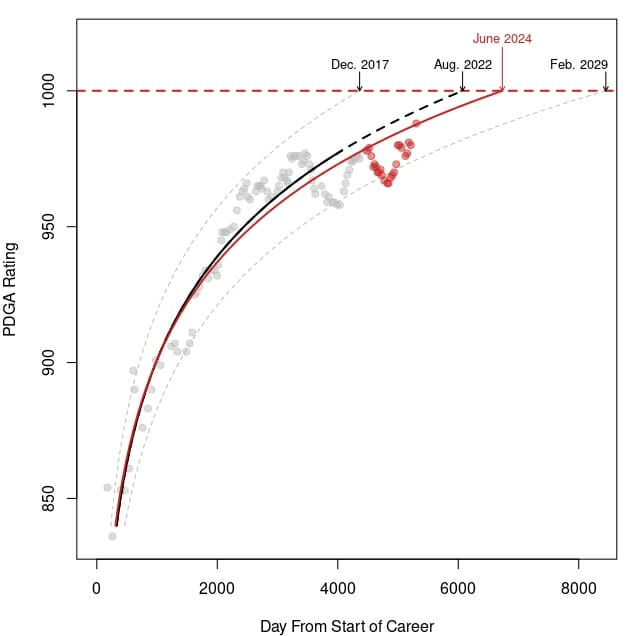 This logarithmic curve fits Pierce’s historical player rating values pretty well, but there is a problem with it: it assumes that there is no upper limit to her rating, or skill, assuming that skill is represented by player rating. While Pierce is a transcendent player, she is still human and is almost certainly approaching some upper boundary to her rating.

Given that assumption, a better way to predict her peak rating is the logistic growth curve. As a biologist, I know this curve because it is used to predict maximum sustainable population size when resources (like food) are limited. Just as it is impossible for populations to grow to infinite sizes due to resource limits, it is impossible for Pierce’s rating to increase infinitely.

So, I found the logistic growth curve that fits Pierce’s historical ratings, and the associated peak of that best fit curve is 980.1 In other words, the model predicts that her highest sustainable rating is 980.

I know what you are thinking: her player rating is already 8 points above that value! Pierce has and will most likely continue to have player ratings above 980. But given her past ratings, this model predicts that 988, let alone 1000, is not a sustainable rating for her. 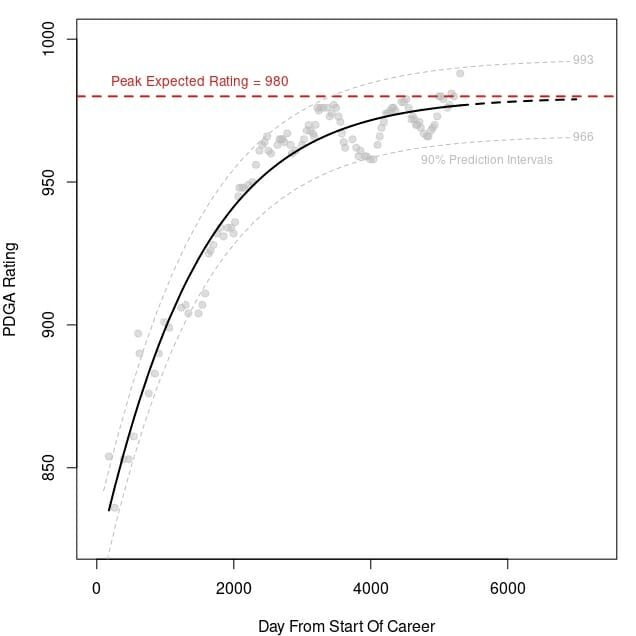 Pierce’s PDGA ratings (gray dots) over time (days from the start of her career). The solid black line is the best fit logistic curve, and the dotted black line is my prediction for her future ratings. The gray dotted lines are the 90% prediction intervals.

These numbers may disappoint you, and to be honest, they disappoint me. I openly admit that I am rooting for Pierce! But we need to keep in mind a few things: 1) I could be wrong, and 2) this 980 value is an estimate and there is always error associated with estimates. This is why I included 90% prediction values in the plot, as well. In other words, there is a 90% chance that Pierce’s peak rating falls between 993 and 966. So her current rating of 988 could be her peak sustainable rating.

If we just focus on the high end of that prediction range, I think we can be somewhat hopeful. While none of the models I have developed indicate it is probable that she reaches a 1000 rating, they also indicate that it is not impossible! She could hit on another incredible (though improbable) hot streak and blow those prediction intervals out of the water. All we can do is wait and see.