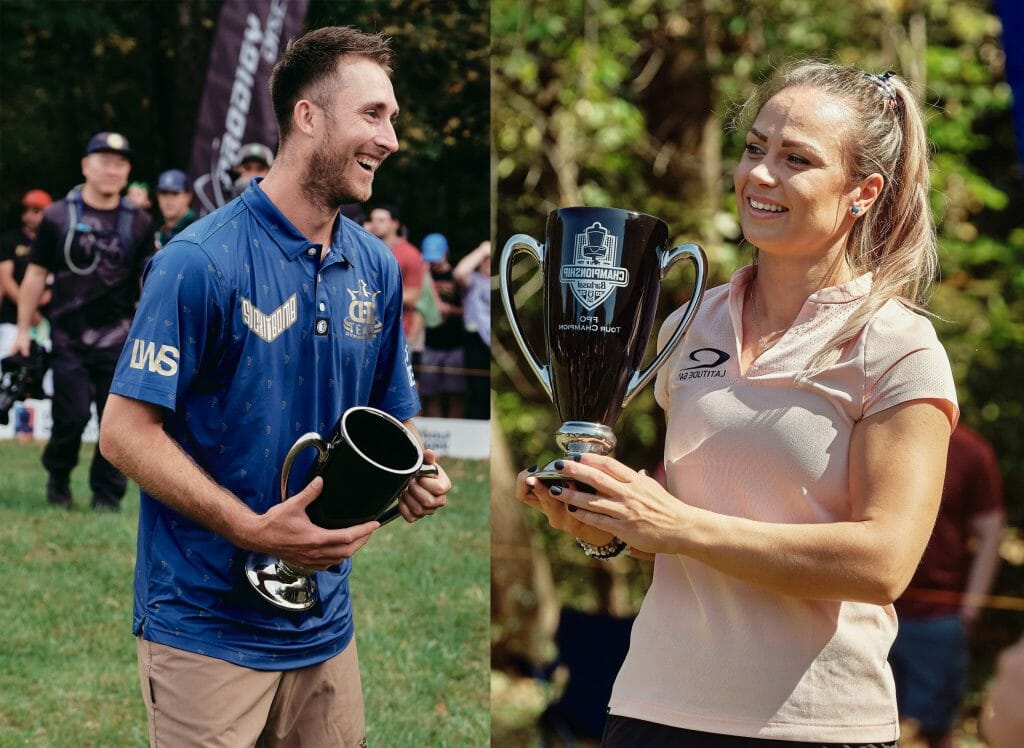 Wysocki has now been named the “Ken Climo Player of the Year” for two years in a row after finishing the season at the top of the DGPT standings and winning the Tour Championship. Wysocki was the top player on the media ballots, which comprised 33% of the scoring for the award. One-third of the scoring was based on Tour points standings, and the final third was determined by the players’ average finish at Majors and the Tour Championship.

Kristin Tattar won her first “Elaine King Player of the Year” award in a landslide. She was first in every scoring category after averaging a 1.33 place finish at the Majors and Tour Championship, which included wins at the TC and World Championships. She was the unanimous #1 selection on the media ballots.

Gannon Buhr, the #4 finisher in the 2022 DGPT MPO points standings, and Valerie Mandujano, the #5 finisher in FPO, were named the Most Improved players for the 2022 season.

The Most Improved awards are determined by a 50/50 split of the media and fan voting components. Gannon Buhr was first in both categories; Valerie Mandujano finished first in the media vote but 2nd in the fan voting behind Kristin Tattar.

Both players showed major improvement across categories, from birdie percentage to cash earned to top 10 finishes. Buhr was 21st in DGPT points in the 2021 season; Mandujano finished 17th. Both players won their first Elite Series or Major events this year, with Mandujano taking down the Waco Annual Charity Open and Portland Open and Buhr claiming the USDGC crown.

The Rookie of the Year award is “given to the player with the highest points total who has not played more than 3 combined DGPT Elite Series events, PDGA National Tour events, or PDGA Professional Major events in a single previous season.” That made it quite clear for the final months of the season that the awards would go to Emily Beach and Isaac Robinson.

Robinson finished 14th in the Tour standings, comfortably ahead of the next eligible player, Niklas Anttila, in 25th. Robinson both played more total events and had more success, notching an impressive win at Idlewild for his first Elite Series victory.

Beach also finished ahead of a European challenger: she was 14th in the final standings with Estonia’s Keiti Tatte sitting in 27th. She had two podium finishes (at the Discraft Great Lakes Open and Dynamic Discs Open) and secured a guaranteed spot at the DGPT Championship.

12 players from each division will be invited to compete at the 2023 All-Star Weekend that precedes the start of the season. The top four players in the DGPT points standings are named the 1st Card All-Stars, and the next two cards are determined by the following criteria: 25% Fan Vote, 25% Media Vote, 25% Tour Points, 25% Average Finish at Majors + DGPT Championship.

Here are the All-Stars: